Party General Secretary and State President Nguyen Phu Trong, on behalf of the Party and the State, has sent a letter of congratulations to the Vietnam News Agency (VNA) on its proud achievements over the 75 years since its establishment.

He wrote that amid the country’s celebrations of the August Revolution (August 19) and National Day (September 2), the agency also marks its 75th anniversary (September 15, 1945 - 2020) and the 60th anniversary of the Liberation News Agency (October 12, 1960 - 2020), while receiving the title “Hero of the People’s Armed Forces”. 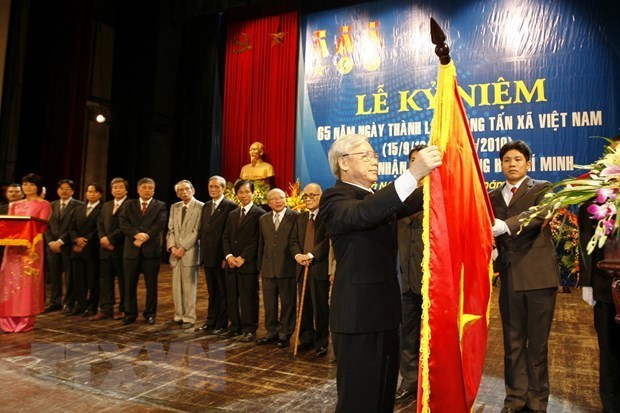 The leader said that since September 15, 1945, when the agency, known as “Viet Nam Thong tan xa” at the time, aired the full text of the Declaration of Independence and the list of the members of the provisional Government of the Democratic Republic of Vietnam (now the Socialist Republic of Vietnam), it has always been accompanying the nation. During the country’s struggles for national independence and reunification, VNA reporters fulfilled their mission of sustaining the flow of information to readers in Vietnam and overseas.

Trong also spoke about the VNA today, which he said follows current developments and publishes news on the Party’s orientations and the State’s laws and policies, encouraging the people in the cause of nation building and safeguarding, as well as the country’s renewal and international integration, and in actively joining Party building activities and strengthening national solidarity.

Amid the far-reaching impact of the fourth Industrial Revolution on all socio-economic areas, he said he hopes and believes the VNA will continue to consolidate its role as the official, trustworthy media agency of the Party and State, providing domestic and international news in various forms for people from all walks of life.

He concluded the letter by wishing all VNA officials, reporters, editors, and technicians good health, happiness, and success.

The Vietnam News Agency (VNA) has produced versions of its song on fighting fake news in 13 additional languages, bringing the total versions to 15.