The 15th plenum of the Party Central Committee wrapped up on January 17 after completing all the contents of its agenda. 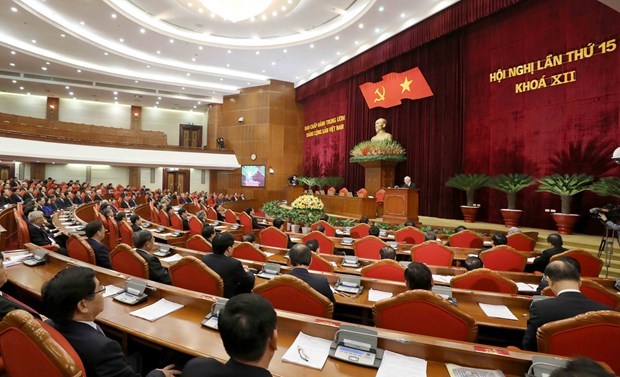 At the plenum, the last of the 12th tenure, the Committee discussed and passed the lists of first-time nominees and the special cases to the Committee of the coming 13th tenure, as well as that of the nominees to the key leading positions of the Party and the State, among others.

The Committee also adopted reports by the Political Bureau on the nominees to the presidium, the secretariat and the eligibility verification board on the delegates of the coming 13th Congress, scheduled to start on January 25.

Speaking at the closing ceremony, Party General Secretary and State President Nguyen Phu Trong stressed that the current Committee has weathered all the difficulties and completed the working agenda, leading the whole Party, people and army to very important achievements, leaving deep imprints and creating new trust and driving forces to bring the country into a new development period.

The leader asked the Committee members to continue bringing into play their sense of solidarity and responsibility in finishing the remaining work, and working as nucleuses so as to ensure the coming Congress a fine success that meets the expectation and hope of the whole Party and people.

A press centre for the 13th National Party Congress is to be opened at the National Convention Centre in Hanoi on January 22.