Defence Minister Gen. Ngo Xuan Lich addressed an ASEAN ministers’ meeting with partners on November 18, describing trust as the most important for countries to cooperate substantively and sincerely in dealing with security challenges in the region.

Defence Minister Gen. Ngo Xuan Lich addressed an ASEAN ministers’ meeting with partners on November 18, describing trust as the most important for countries to cooperate substantively and sincerely in dealing with security challenges in the region.

He delivered a speech at the 6th ASEAN Defence Ministers’ Meeting Plus, themed “Sustainable Security”, in Bangkok on November 18.

The event saw the participation of defence officials of the 10 ASEAN countries and the dialogue partners of Australia, China, India, Japan, the Republic of Korea, New Zealand, Russia and the US.

Minister Lich said peace, cooperation and development are still the main trend, in which the regional security cooperation mechanisms led by ASEAN have proved increasingly effective, helping to maintain a peaceful and stable environment for economic growth and sustainable development.

Sharing other officials’ concern about the recent regional and global situations, he emphasised that security challenges in the region are growing, from climate change, piracy and cyber security to disputes and disagreements on sovereignty and territory. Notably, many latent signs have appeared and may become hot spots if they are not dispelled or prevented in a timely manner.

Lich called on countries in the region to uphold responsibility and together effectively deal with differences and prevent issues from becoming conflicts. He also underlined the need to adhere to international law; bring into play community responsibilities, especially by superpowers; and promote existing bilateral and multilateral cooperation mechanisms in the region.

According to the Vietnamese minister, for regional countries, big or small, to cooperate substantively and sincerely in solving security challenges in the region, trust is of the top importance.

The building and consolidation of trust require time and patience, and trust must be strengthened regularly on the basis of concrete principles and actions, Lich said, adding that the trust building process needs the consistency between words and actions, the transparency in policy making and implementation, and the harmonisation of each country’s interests with those of other countries and the region.

Particularly, all actions must be in line with the principles enshrined in the United Nations Charter, international law and regional commitments, he noted.

The minister said the recent tensions in the East Sea show that once international law is not respected, security and stability in the region in general, and at sea in particular, will be jeopardized.

Peace in the East Sea is not only the benefit for the parties directly concerned but also the common benefit for the region and the world. The settlement of the East Sea issue in a peaceful manner, in the partnership spirit and for community responsibility is the foundation to turn it into a water body of peace, cooperation and development, he added.

Lich also reiterated Vietnam’s consistent policy of solving the East Sea issue by peaceful means on the basis of international law, and that relevant parties must respect one another’s legitimate and legal interests stipulated in the 1982 UN Convention on the Law of the Sea (UNCLOS) and steer clear of actions that may complicate the situation or elevate tensions.

Vietnam has been actively joining hands with other ASEAN members and China to build a substantive and effective Code of Conduct (COC) in the East Sea, he noted.

At the meeting, participants discussed traditional and non-traditional security challenges like terrorism, the reverse effect of technological development, and cyber security.

They also had in-depth discussions on maritime challenges, including those relevant to the East Sea, and affirmed the importance of the maintenance of peace and stability in the waters to regional and global security.

Many ministers stressed the need to respect international law, including the 1982 UNCLOS, and expressed the hope to soon finalise an effective and substantive COC./. VNA 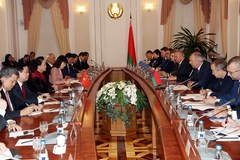 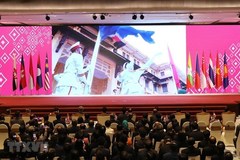 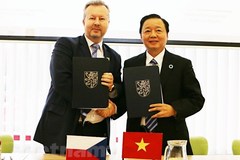 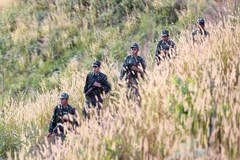 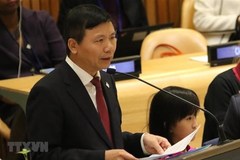