“We are struggling to protect sovereignty, and protect the peaceful environment and common interests of the East Sea (internationally known as South China Sea), together with the international community,” said General Nguyen Chi Vinh.

On the sidelines of a conference discussing the plan for ASEAN defense and military conferences in 2020 in Hanoi on Tuesday morning, Senior Lieutenant General Nguyen Chi Vinh, Deputy Minister of National Defense, was interviewed about the East Sea. 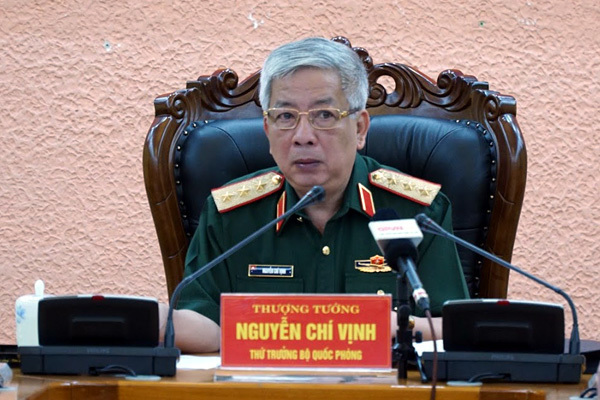 Vinh emphasized that in the ASEAN area as well as Asia Pacific, all the traditional and non-traditional security challenges affecting regional stability and peace come together, including ones related to the East Sea.

This is a concern not only for Vietnam but also of the entire world, especially regional countries, and countries with interests related to Asia Pacific.

“We need to affirm that security, maritime and aviation safety in the South China Sea are the common interests of the whole world. These issues must be resolved by peaceful means on the basis of international laws which aim at stability, cooperation and development in the region,” said Vinh.

According to Vinh, strategic conflict among big countries is inevitable during the development process, but the friction must not and should not affect the interests of other countries in the region. An example is security and maritime and aviation safety in the East Sea.

“We struggle to defend sovereignty, and fight to protect a peaceful environment, and the common interests of the East Sea together with the international community. This will be the guideline at defense and military meetings that will take place in the time to come," said the Deputy Minister of National Defense.

Regarding the ASEAN 2020 defense and military meetings, Vinh said the meetings need to be organized in a way so that participating countries understand that when coming to Vietnam, all countries can sit together.

“We don’t want and won’t let outside conflicts be present at the meetings. With such an aim, we expect to have a statement by Ministers of National Defense on improving solidarity and unity and the central role of ASEAN regarding regional issues,” he said.

“This is a statement at ASEAN ministerial level, but it is also a declaration to the world that we want peace in the region. We do not want to militarize and compete strategically to create conflicts that could influence peace and security in the region,” he continued.

There will also be a statement by the Vietnamese Minister of National Defense which will express Vietnam’s views and assessment of the success of the ASEAN year when Vietnam holds the presidency.

According to Vinh, Vietnam will organize several important events, such as the parade of naval ships on the occasion of the 65th anniversary of the Vietnamese Navy, to be associated with the naval commander conferences of ASEAN countries. ASEAN countries as well as all countries which are partners and friends will be invited to the parade.

Lieutenant General Vu ChienThang, head of the Foreign Affairs Department of the Ministry of National Defense, said the preparation for the ministry’s chairmanship of ASEAN 2020 year began very early. The plans on organizing ASEAN national defense and military conferences in 2020 were approved in April 2018.

A Ministry of National Defence’s ASEAN 2020 Steering Committee and sub-committees have been established.

Many conferences and national defence and military activities will be organized in that year, in many locations from the north to the south, including ADMM, ADMM+ and ADSOM+ conferences.

Vinh emphasized that the successful undertaking of the role of the chairmanship of ASEAN 2020 has a very important political significance which affirms the role and position of the Vietnam People’s Army in international integration and contributes to the country’s great success.