China is making waves in the East Sea

The foundation to ensure stable peace and Vietnam's sovereignty over the East Sea is to gather and promote national strength and enlist the support of nations in the world. 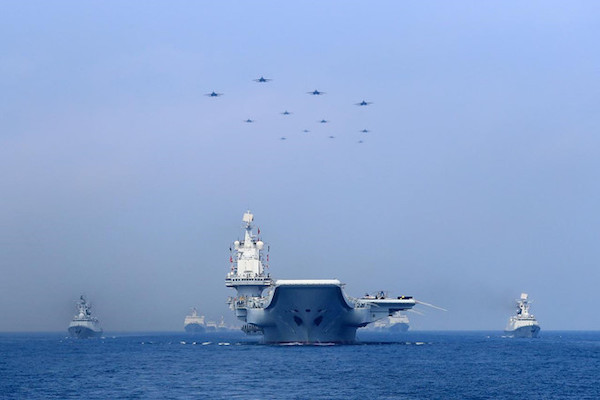 China is making waves in the East Sea (photo Reuters)

These are the territorial waters belonging to the Vietnamese exclusive economic zone and continental zone in the south of the East Sea.

Vietnamese Foreign Ministry’s spokesperson Le Thi Thu Hang issued a statement criticizing the intentional violation of Vietnamese sovereignty; the violation of bilateral agreements on cooperation in the East Sea that Vietnam and China signed and announced; and the cruel violation of international laws.

On the act of China disregarding international laws, Morgan Ortagus, spokesperson for the US State Department, also issued a critical statement of China's actions in the East Sea.

“China’s reclamation and militarization of disputed outposts in the SCS, along with other efforts to assert its unlawful SCS maritime claims, including the use of maritime militia to intimidate, coerce, and threaten other nations, undermine the peace and security of the region."

“The US firmly opposes coercion and intimidation by any claimant to assert its territorial or maritime claims. China should cease its bullying behavior and refrain from engaging in this type of provocative and destabilizing activity. ”

However, in order to explain its illegal actions, China argued that the Vanguard Bank is a part of ‘Nansha Island’ (the Chinese name for Truong Sa, or Spratly Islands of Vietnam) and belongs to its ‘inviolable sovereignty’.

The argument is completely contrary to the provisions of the 1982 UNCLOS (United Nations Convention for the Law of the Sea.

To clearly understand China’s intrigue and tricks to take over the East Sea, it’s necessary to review its actions over the last 70 years.

Initially, some Chinese officials created the cow tongue line. According to documents made public by China, the story about the line is as follows:

After a two-month survey trip from Phu Lam Island in the Hoang Sa archipelago to Ba Binh Island in Truong Sa (belonging to Vietnamese) was organized, returning to the headquarters in Guangzhou, commander Lin Zun and subordinates drew an 11-dash line map and told the Ministry of Internal Affairs to print the map with the line in October 1947.

According to Hong Kong and Chinese newspapers, the ‘process’ of the cow tongue line, or the U-shaped line as called by China, was through appropriate agencies of the Republic of China.

As such, the line, even if it was approved, is illegal, because no state in the world can arbitrarily draw a map gathering the territorial waters of many other countries to create its territory.

Since it is absurd, countries which have territories overlapped by the cow tongue line, show strong opposition, as well as some Chinese scholars and researchers also comment this is an arbitrary product, blatantly infringing the sovereignty of other countries.

Scholar Li Linghua from the China Oceanography Center said the U-shaped line or the nine-dotted line that Chinese ancestors drew does not have any legal grounds.

They have no understanding of the 1982 UNCLOS, they ignore arguments, and they even despise the convention they have signed. What they say they know about the cow's tongue line is extremely sloppy. All the land and territorial waters boundaries in the world are clear and unbroken lines, while the U-shaped line is just an ambiguous dash line.

In 1953, the Chinese government once again approved the U-shape line, created a 9 dash line instead of 11 dashes. The boundary of the new 9 dash line has been expanded, encroaching on territorial waters and continental shelves of Vietnam, Malaysia and the Philippines.

With the approval of the new 9 dash line, the Chinese government has taken action to prepare to implement its ambition and conspiracy to annex the East Sea.

In order to carry out long-term conspiracy and purpose, after occupying the reefs of the Vietnamese Truong Sa, the Chinese administration quickly turned these places into its military bases.

Moreover, according to international documents, China has been trying to turn the artificial islands into the "battleships" that serve the ambitions and attempts to annex the entire East Sea and control the entire area.

In the face of the Chinese conspiracy, tricks and drastic actions to monopolize the East Sea, Vietnam needs to take measures to protect its sovereignty and the right for sovereignty in the East Sea.

1/ promptly inform the people about China's conspiracy, tricks and actions of monopolizing the East Sea. Only by doing this will Vietnam be able to gather and promote the strength of the entire nation, the strength of all Vietnamese in the country and abroad, and the will and determination to firmly protect the national sovereignty.

2/ Using historical documents and international laws to struggle with China with peaceful measures and dialogues. If necessary, Vietnam can sue China in the The Haye International Arbitration Court like the Philippines did in 2016.

3/ Constantly strengthening the ability to defend the country, especially the coastal and sea defense. Building friendly relationships with neighboring countries, and countries in the region and the world.

4/ Building trusting strategic relationships with countries, especially with the great powers and countries that have the same interests in protecting peace, stability and international law in the East Sea.

5/ Through diplomatic and communication channels, Vietnam can make the international community understand the Chinese conspiracy and blatant infringement of Vietnamese sovereignty in the East Sea.