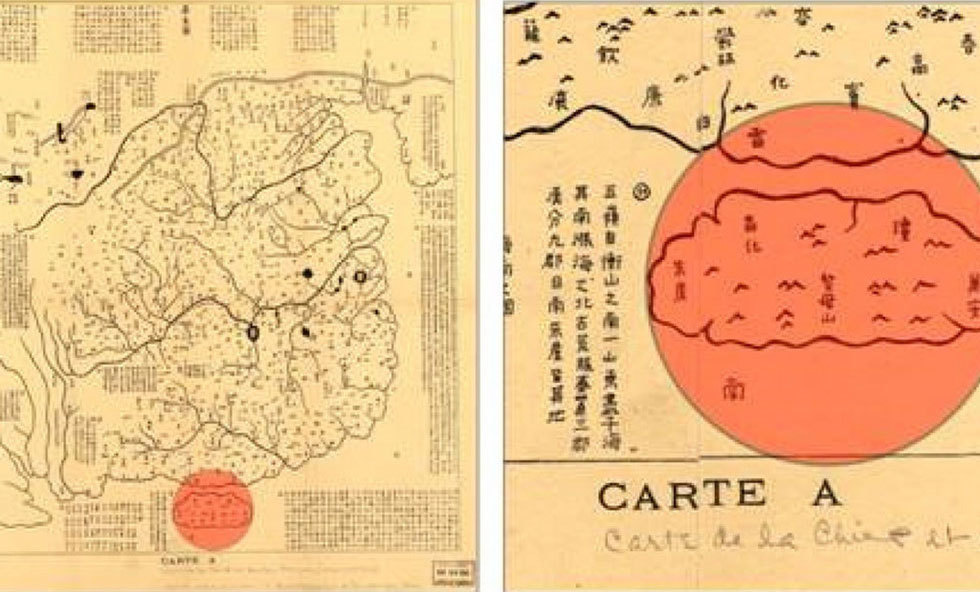 According to Chinese history, in 218 BC, Qin Shi Huang tried to conquer the south and in 214 BC invaded Van Lang - Au Lac (Vietnam). The struggle of the people of Van Lang - Au Lac lasted from 214-208 BC and ended with success.

This fight took place only in the North of the Red River basin of Van Lang - Au Lac territory. Therefore, the Qin army could not set foot in the southern part of the Red River, so they could not cross the sea to reach Hoang Sa and Truong Sa in the middle of the sea.

When the Han replaced the Qin Dynasty and proceeded to expand the land towards the South, it captured three Viet countries (Dong Viet, Man Viet and Nam Viet), but the Western Han Dinasty had no power at all in the sea area of below 20o North.

In the age of Three Kingdoms (220-265), Wan Zhen wrote the book "Nam Chau di vat chi" (A book about strange things in Nanzhou) described the rock and sand islands on the East Sea. The book recorded the "strange" things he found in foreign countries, not strange things in China.

In the 785-805 period of the Tang Dynasty, there was a book by Gia Dam (Gaobie Daba) about the things he saw on the sea route from Guangzhou to Malabar and it did not mention the Paracel and Spratly Islands.

Also in Tang Dynasty, the book "Duong thu nghe van chi" mentioned  the book "Giao Chau di vat chi" by Yang Fu which recorded strange things and strange places in Giao Chau (Vietnam). The book wrote that That Chau Duong (Hoang Sa Islands) was the place of many magnetic stones, and it was impossible for foreign boats with iron bolts to pass through.

This once again affirms that Hoang Sa Islands belonged to Giao Chau in the past, or Vietnam in modern times.

Another book in the Song dynasty said the border of Chinese territory with other countries was in Tonkin Gulf, while Hoang Sa and Truong Sa are hundreds of miles away from the Tonkin Gulf to the south.

Thus, ancient Chinese bibliographies in the Song dynasty all show that the Paracel and Spratly Islands did not belong to China but to another country, which China called Giao Chau (Jiaozhou) or Giao Chi (Jiaozhi)

The southernmost territory of China is Hai Nan Island

The book also wrote that Wànlǐ cháng shā (Hoang Sa Islands) was a dangerous place where Chinese boats should not come close to. "Chư phiên chí", the title of the book, means stories about foreign countries. Hoang Sa, in the book, was not located in China, but in Nam Viet. As such, the Chinese southernmost territory in the Han dynasty was in Hainan Island.

In "Dư địa đồ đời Nguyên" (Maps of the Yuan Dynasty) by Chudou, which was resized in a map book entitled "Quang du do" by La Hongtian released in 1561, Hainan Island was once again defined as the southernmost Chinese territory.

In the Ming Dynasty, in Mao Yuan Yi's "Vu Bi Chi" book, the East Sea was called Jiaozhi sea. Other maps drawn by a Chinese navigator of this time, named Tè lín hé who traveled through the East Sea to explore the Indian Ocean did not mention Hoang Sa and Truong Sa.

In the Qing Dynasty, in the book "Hải ngoại ký sự" (Overseas records) released in 1696, a monk of the Kangxi dynasty who came to Thuan Hoa land of Vietnam's Lord Nguyen in 1695 mentioned the location of Hoang Sa, writing that Hoang Sa was a 7-day trip from Dai Viet, about 700 miles away.

A page of the book narrated the trip to Dang Trong (Dang Trong was a de facto independent kingdom ruled by the Nguyen lords), acknowledging the sovereignty of the two archipelagos of Hoang Sa and Truong Sa of Dai Viet.

This is a recognition of Dai Viet's sovereignty in the control and exploitation of the East Sea, where the Hoang Sa and Truong Sa Islands are located, because the book is written by Chinese about what they saw overseas, not in China.

In the 19th century, a Chinese book entitled "Hải quốc đồ ký" by Wu Pingnan described Hoang Sa as a sand strip in the sea used as a fence that shields the outer side of An Nam (Vietnam). As such, the document acknowleged that Hoang Sa Islands belonged to Vietnamese territory.

In the case of the fishermen of Hainan Island robbing a wrecked ship carrying copper in the Hoang Sa Islands in 1895-1896, responding to an appeal letter from the British government, the Viceroy of the Two Guangs (Guangdong and Guangxi) stated that Hoang Sa had no relation to China.

As such, ancient Chinese documents all show that Hoang Sa (Paracel) and Truong Sa (Spratly) (China calls Xisha and Nansha) have been discovered and used for many centuries peacefully and continually by the Vietnamese, without any protest from any countries, including China.

In the book "China's medieval history" released in 1978 in Taipei by the Chinese Academy of Science, scholar Hsieh Chiao-Min commented that throughout its history, in cultural and scientific development, the Chinese people have not been keen on the ocean.

Behind China's violations is the intention to control the East Sea through promoting maritime claims that are completely contrary to the provisions of the 1982 UN Convention on the Law of the Sea (UNCLOS).