Which bailout package for the economy will be passed?

Minister of Planning and Investment Nguyen Chi Dung has been assigned a difficult task – drafting a program on recovering and developing the economy in association with improving economic autonomy in 2022-2023. 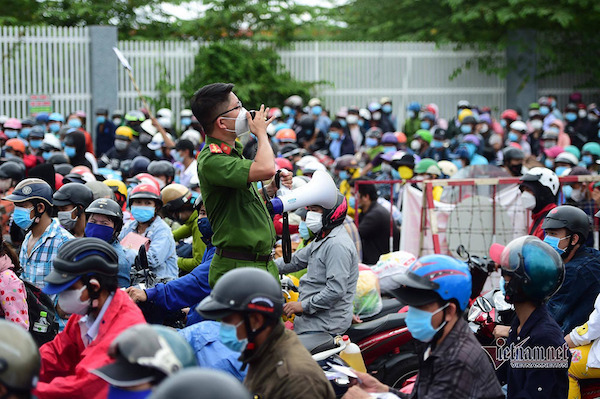 Thousands of people want to return to their hometowns

The big challenge for him is that the program needs to be designed to prescribe a reasonable ‘dosage’ to the economy, but it must not cause macroeconomic uncertainties.

The program needs to satisfy multi-purposes at the same time – preventing and controlling the pandemic; supporting enterprises, especially small and medium ones (SMEs), to restore and speed up production and business; and supporting the poor, disadvantaged groups and workers, especially workers in the service and industrial production sectors.

Moreover, the program needs to design radical solutions to help accelerate economic restructuring, and renovate the growth model, striving for more rapid and sustainable development in the future.

Such a multi-purpose large-scale program is urgent and necessary to respond to the serious devastation of the pandemic and prevent the risk of recession.

The world is recovering

The International Monetary Fund (IMF) predicted that the global economy would obtain a 6 percent growth rate this year and 4.9 percent next year. The prospects of emerging markets, especially Asia, have been lowered because of the new Covid-19 pandemic outbreaks, while the prospects of developed countries have been raised thanks to high vaccination rates and changes in support policies.

In the region, Thailand has launched a bailout worth 11.4 percent of GDP, and Malaysia 5.3 percent.

According to Bui Quang Tuan from the Vietnam Economics Institute, the Thai Government has given support to travel firms through tax incentives and lending programs, worth $4.8 billion, while banks have provided loans worth $15.9 billion. Moreover, the Government reserves $12.7 billion for socio-economic recovery projects.

Meanwhile, the Japanese Government has allocated a budget of 1.7 trillion yen, or $15.49 billion, to the ‘Go To Travel’ campaign alone.

Dung estimated that Vietnam’s bailout package is worth $6.7 billion, including preferences in fiscal policies. If counting the support via other channels (unemployment insurance fund, telecom, electricity, water, tuition charges), the figure would be $10.45 billion, or 2.84 percent of GDP.

“The support level is still low,” he said at a consultation with economists late last week. The policies laid down so far aim at helping businesses and people deal with short-term financial difficulties, which would mostly have impact on the supply of the economy.

Meanwhile, Vietnam still lacks master long-term solutions with resources big enough to speed up the process of economic recovery in association with structural reform and competitiveness to improve the resilience of the economy to shocks in the future.

Nguyen Dinh Cung, a respected economist, stressed that if there is no economic recovery program, it would be very difficult to accelerate growth in 2022-2024 after two years of failing to obtain the targets.

Cung went on to say that the situation is much better than that in 1999-2011. The inflation rate is stable, finance still has a solid foundation despite some risks, and the ratio of budget overexpenditure and public debts to GDP has decreased. The forex market is four times higher.

“I believe that it’s necessary to spend big money now. We must not be miserly in such a crushing crisis,” Cung said, adding that the behavior must be non-traditional, because it will be too late if we have to follow all administrative procedures.

An analyst commented that the economic growth rate in Q3 was minus 6.17 percent, a figure never seen since 2000 when the General Statistics Office (GSO) began calculating GDP quarterly.

This is attributed to the fourth outbreak in key economic zones, including HCM City and the eastern part of the southern region, which forced local authorities to impose large-scale long lockdowns.

The labor chain disruption caused serious consequences to the economy. As the outbreak has been controlled and local authorities have loosened lockdowns, businesses have begun seeking workers. However, workers continue leaving cities for their hometowns.

However, the analyst does not agree with the proposal on rescuing the economy with monetary policy. While in other countries the resources used to support businesses and people are from the state budget (taxes and fees), in Vietnam the resources are from commercial banks.

The analyst, citing the insolvency of the people’s credit funds in late 1980s and the handling of weak banks a decade ago, stressed that it’s necessary to be very cautious when using banks’ resources to support businesses, because there are risks for banks.

“It’s necessary to consider different scenarios and think of asking for permission to increase the state budget overexpenditures, and increase public debts and Government’s debts. It must be fiscal policy,” he said.

Nguyen Quoc Ky, Chairman of Vietravel, a big tourist company in Vietnam, said that due to the impact of the 4th wave of Covid-19 epidemic, the entire tourism industry of Vietnam has been closed since May 2021.

Vietnam continues to extend tax and fee exemptions amid the ongoing pandemic, with a new VND24 trillion ($1.04 billion) bailout package in the making.