Weathermen on island 'with no women' miss home, but perform essential duties for nation

Departing from Cua Lo in Nghe An in cloudy windless weather, after 40 minutes of floating on the sea, the delegation of journalists arrived on Hon Ngu Island, just four kilometers from the shore but isolated and primitive. 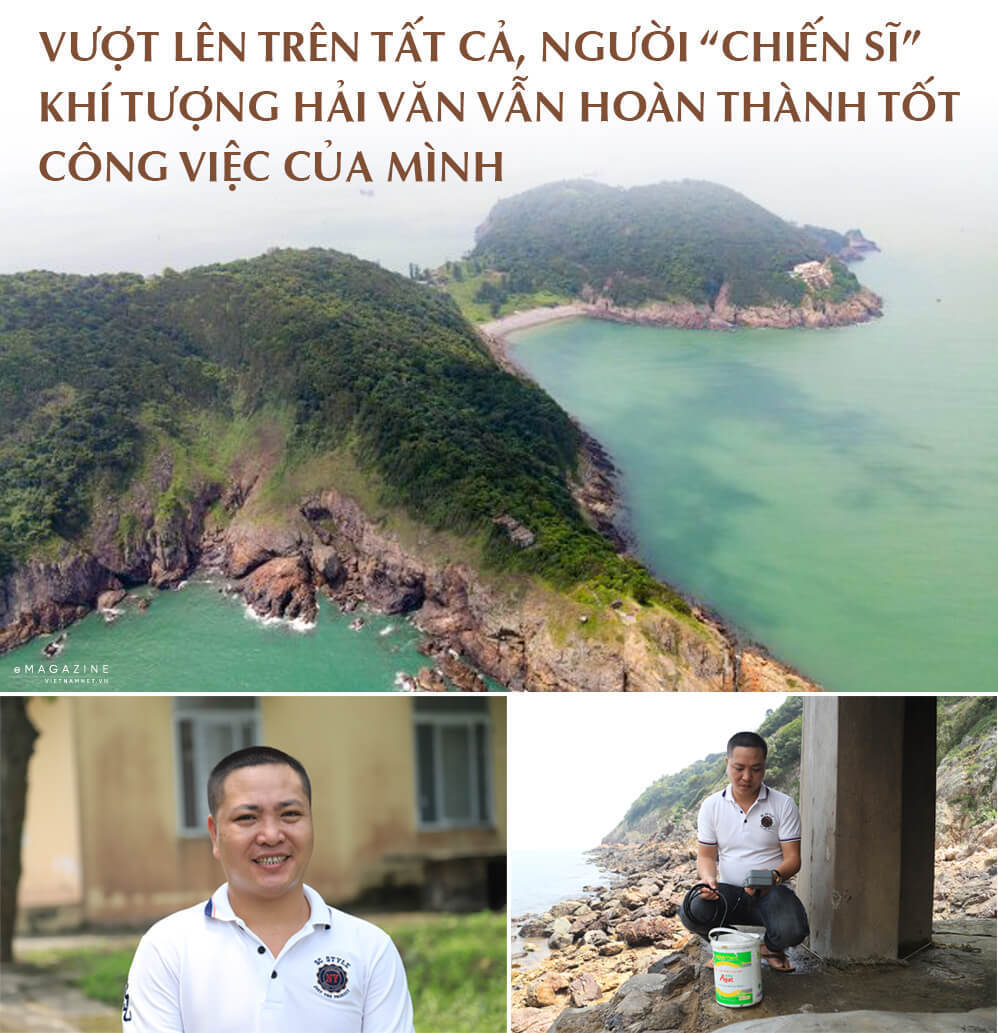 Surrounded by two seaports of Cua Lo and Cua Hoi, Hon Ngu has an extremely important strategic position in national defense, security and economy. The island has an area of only 2.5 square kilometers, comprising two islands: the largest is 133 meters above sea level and the smallest is 88 meters above sea level.

As the two islands are close to each other, people call them Song Ngu, which means two fish swimming on a wave.

Acting as a breakwater for Cua Lo town, Hon Ngu Island has a tropical monsoon climate and the same characteristics as the central region’s climate. The island also holds an important position in hydrometeorology.

In recent years, the investigation and monitoring of meteorological data on the island have become more urgent in the context of climate change and extreme weather phenomena with prolonged hot spells and stormy weather.

The hydrometeorological station is not called a gauging station like many other stations because instead of measuring river water observers measure the salinity of sea water.

Previously, one had to go through thick trees to reach the station. The island then was overgrown with trees which even encroached on houses.

Nowadays, there is a paved road with stairs linking to the station. However, for those who come for the first time, this is a difficult journey as they have to travel up two kilometers to reach the mountain top.

There are cliffs and sea on one side and thick forests on the other side, while there are thousands of stairs covered with moss. When the sun shines, the stairs are slippery, which may cause travelers to fall and slip.

The Dao Ngu Hydrometeorological Station is located on the mountain top. Its nearest neighbor is the Company 33 of the Military Command of Nghe An Province.

The special characteristic of Hon Ngu is that there has never been women on the island.

Head of Hon Ngu Hydrometeorological Station Hoang Huy looks sturdy and tanned because of the scorching sun on the island.

There are three officers at the station, including Huy, born in 1984, from Vinh City, and two observers, Nguyen Ngoc Son, born in 1987, from Hung Nguyen and Nguyen Canh Long, born in 1989, from Do Luong.

On one day, they had to conduct observation and information delivery four times, or four OBS's. On ordinary days, they have to do one OBS every six hours. But on stormy days, they have many OBS.

No matter how scorching the sun is or how severe the storms are, regardless of day or night, on every scheduled time, they have to pass thousands of stairs to reach the station on the mountain peak and go to the seashore to measure sea water level, monitor the clouds, and measure humidity, rainfall, wind speed, and orientation.

After that, they update the information via phones wih the central station on the mainland, and issue weather forecast bulletins.

The house where observers measure sea water level is 10 meters above sea water and three square meters. Holding the machine measuring salinity in his hands, Huy said if the weather is good, it is easier to measure the sea water level and can be done onshore.

But when the weather is bad, the winds and the sea waves are high, so it is dangerous to do this work.

“When people shelter themselves from storms, we have to expose ourselves to the storms and risks to conduct measurements,” Huy said.

When the sea is rough, the waves high, they only work inside the house and do not return to the main station.

Each year, there are 5-6 storms and tropical depressions directly or indirectly affecting the island. The observers face the highest risks during stormy months.

The station is equipped with modern monitoring tools, which helps ease the workload of observers, but their life on the island is still hard because there is no electricity from the national grid, no people, and sometimes no food.

The three men staying on the island are from different localities. Nguyen Ngoc Son has been on the island for more than 10 years, while Huy has been there for two years.

The rare light in the evening comes from a lamp runs from an electricity generator. They live on food carried to the island periodically.

But if the ships cannot come to the island because of unfavorable weather, they eat instant noodles and vegetables grown on the island themselves. They get water from a drilled well, but they mostly live on the water from "God". They are often homesick as they return home only once a month.

Vietnam has made progress in weather prediction, extending the typhoon and tropical depression forecasting and warning to between three and five days, according to the Vietnam Meteorological and Hydrological Administration.

In a bid to ensure sustainable development and economic growth, the government has enacted a fresh action programme on continuing response to climate change, with new mechanisms in favour of private investment.