Vietnam shows its 'firm stuff' after five years of difficulties

The US-China trade war, Brexit, the US withdrawal from TPP, Covid-19 and internal difficulties all have affected Vietnam’s economy in the last five years.

However, the country has overcome difficulties and is among the fastest growing economies in the world. 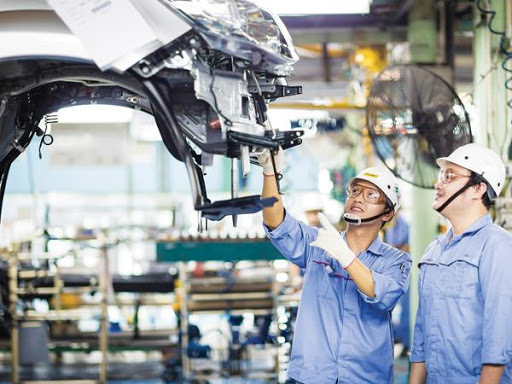 As a teacher and a businessman running a company, To Nhat, president of Success Business School, CEO of AMACCAO Group, understands the pressure caused by the world’s political and economic upheavals in the last five years.

“Five years ago, we did not have many international partners because our operation was only in construction and installation with products mostly consumed domestically. So there was little impact from these upheavals,” he recalled.

However, in the last five years, business owners have clearly felt the impact. Even minor events in large economies are enough to affect Vietnam’s businesses.

The world has been in an abnormal situation since the US-China trade war broke out, the UK decided to leave the EU, the US abandoned TPP, and the Covid-19 pandemic appeared, said Nguyen Minh Cuong, ADB Chief Economist.

However, Vietnam has gained new achievements amid difficulties.

Tran Toan Thang, a respected economist, said in the 2016-2019 period, Vietnam had great success in developing the economy. The GDP growth rate hovered around 7 percent in the 2018-2019 period. And if the macro indicators in 2020 had been similar to previous years, the figures in 2016-2020 would have been very good.

The ‘if’ did not happen. The indicators used to measure Vietnam’s economy were seriously hit by the Covid-19 pandemic. The GDP growth rate in 2020 decreased by half compared with the year before, while the state budget collections were lower than planned.

However, the 2.91 percent GDP growth rate, among the highest in the world, for 2020, which was the last year of the five-year 2016-2020 development plan, has been hailed by international institutions.

The macro foundation has become better in the last five years, while people and businesses have shown resilience after shocks.

The size of the national economy has increased by 1.4 times, reaching $340 billion, the fourth largest in ASEAN.

A report on the five-year 2016-2020 socio-economic development plan by the Ministry of Planning and Investment (MPI) shows this clearly. The GDP growth rate in the 2016-2019 period was relatively high, at 6.8 percent on average.

However, according to Thang, there were some ‘minus points’. Economic bottlenecks have not improved much. Vietnam did not make any breakthrough changes in training to prepare human resources for the new investment wave. The proportion of skilled workers has risen, but not sharply.

“Investment and labor force remain the two big bottlenecks. We have accelerated the 4.0 industry revolution and promoted digital technology. However, the institutions and policies for the new issues remain unclear,” he said.

He said though the economy had expanded, it was not big enough for the country to reach a new development level.

The report by MPI pointed out that the economic growth rate was lower than planned. Vietnam still has not caught up with other regional countries.

Meanwhile, the risk of falling into the so-called middle-income trap and lagging further behind remains a real challenge.

Vietnam is entering a new development stage with an ambitious plan of becoming a high income country by 2045. The country has been a middle income country for the last 12 years, since 2008.

Vietnam must not continue to lag behind

Asked what Vietnam should do in the next development period, Cuong from ADB said Vietnam needs to continue the process of shifting to a market economy. It is necessary to encourage the development of the private sector, because only a dynamic private sector will help Vietnam overcome difficulties.

Nhat from Amaccao affirmed that recent years have witnessed the strong rise of Vietnam’s private economic groups, many of which can compete equally with international enterprises.

The 13th National Party Congress is expected to set the country’s average annual growth rate of 6.5-7 per cent from now until 2025, when Vietnam may become a higher middle-income nation.

Vietnamese economy tipped to bounce back in 2021

Many economists have said the Vietnamese economy is set to speed up this year.