Vietnam should not be slow in opening its door: economists

Prime Minister Pham Minh Chinh has said that Vietnam should not adjust the development goals and agrees with the two GDP growth scenarios designed by the Ministry of Planning and Investment (MPI). 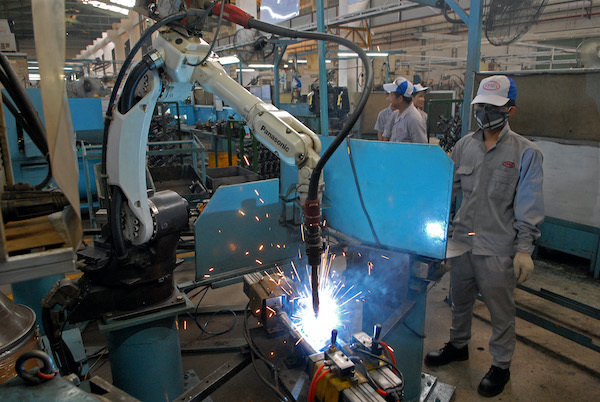 In Scenario 1, the Covid-19 outbreak would be contained by July, with no hotbed in industrial parks and no social distancing in key economic centers. Vietnam would have a GDP growth rate of 6 percent as set by the National Assembly (6.2 percent in the third quarter and 6.5 percent in the fourth quarter)

In Scenario 2, the outbreak would be controlled by June, there is no hotbed in IZs, and cities/provinces don’t have social distancing. Vietnam would obtain a GDP (gross domestic product) growth rate of 6.5 percent as shown in Resolution 01 (7 percent in the third quarter and 7.5 percent in the fourth quarter).

In general, economists all agree with the scenarios. However, Tran Dinh Thien, a respected economist, former Head of the Vietnam Economics Institute, warned that the path ahead for the next six months will be much tougher.

He is worried that Vietnam will escape the pandemic later than the rest of the world and open its door later also.

He raised a question about the real strength of Vietnam’s businesses, if 85 percent of businesses are hit hard by the pandemic, but the GDP growth rate is still high.

“Will businesses be able to rise up when we open the door again?” he said.

According to Thien, the countries which have returned to normal are those that suffered most heavily at first. They incurred initial damages, and then controlled the pandemic with vaccinations.

This will make weaken its connections with the world’s supply chains.

Nguyen Dinh Cung, former head of the Central Institute of Economic Management (CIEM), noted that the world’s spending on scientific research has soared in recent years. Other countries have made heavy investment in new business models and automation, which increases productivity.

Looking at the economies with high growth rates in the last six months, one can see that the driving force behind the growth lies in technological fields, and increased productivity from technology application.

“We should not be slower than the world in opening our door. In order to do this, the Government, the leaders of ministries, branches and localities need to dare to think, dare to do, and dare to take responsibility as the Prime Minister said. We must not wait for the pandemic to finish and then begin,” Cung said.

He warned that the habit of waiting for guidance and only getting to do something after instructions could be a big obstacle to growth.

For example, regarding the application to establish a new air carrier IPP Air Cargo, the Ministry of Transport (MOT) must not say that Vietnam will only consider licensing new carriers after the pandemic is contained, expected after 2022.

IPP Air Cargo is a cargo transport firm, and if it can fly now, when the world market is recovering fast and the demand is high, its opportunities to succeed will be great. If succeeding, it would not only benefit the enterprise, but the whole economy as well.

Cung said that it is necessary to take the initiative in discussions with enterprises to find reasonable solutions instead of only thinking of solutions after hearing complaints from businesses.

At present, new business plans and new business models should be encouraged, not only in order to offset the decreases in traditional models, but also to prepare for the next development period.

Discussing the solutions to support enterprises, Thien said it would be better to reserve resources to rescue the enterprises that can create efficiency and act as the pillars of the economy. The remaining resources should be used to support startups.

Second, it is necessary to apply policies to attract capital to production and business instead of the stock market and real estate speculation. To do this, the plan to open the door needs to be figured out, together with scenarios on pandemic control and vaccination.

Cung also emphasized the need to change investment encouragement policies immediately to keep up with the new development trend. For example, a mechanism is needed to encourage relocation of labor intensive industries out of HCM City.

The latest outbreak showed that the industrial zones (IZs) in HCM City are mostly labor intensive enterprises. The city should be a place for high-tech enterprises and R&D (research and development) projects.

Third, it’s necessary to seek opportunities to promote the recovery of the private sector and SOEs (state owned enterprises) on the basis of choosing new professions and new ways of doing things.

Vietnam’s merchandise trade balance in the first half of the year resulted in a trade deficit. Last year, it had a trade surplus for the same period.

The domestic economy has been gradually escaping from a slowdown, with growth bouncing back over the past three months thanks to the government’s efforts to curb the pandemic and remove enterprises’ obstructions,

icon
The room that is always lit at field hospitals
icon0

icon
Unprecedented decisions made by of National Assembly, Government to fight Covid-19
icon0