Vietnam sees record-high exports in 2020, but worries about trade accusations

Overcoming lockdowns during Covid-19, Vietnamese goods still reached all corners of the planet. 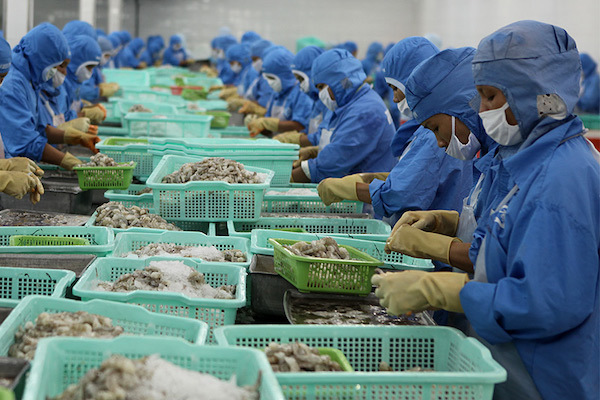 The average export price was $499 per ton, an increase of 13.3 percent over the year before, the highest level in recent years.

Prime Minister Nguyen Xuan Phuc, attending a conference reviewing industry and trade in 2020, said he was happy to hear that despite difficulties, Vietnam still had 31 export items which brought turnover of over $1 billion, of which nine items had turnover of over $5 billion and six over $10 billion.

Minister of Industry and Trade Tran Tuan Anh reported that Vietnam exported $281.5 billion worth of products in 2020, up by 6.5 percent over 2019, and witnessed a record high trade surplus of $19.1 billion.

This was the fifth consecutive year that Vietnam saw a trade surplus.

Anh said Vietnam has one of the fastest export growth rates in the world.

In official reports, the US was the largest export market for Vietnam in 2020. It imported $76.4 billion worth of products from Vietnam, up by 24.5 percent. Vietnam enjoyed a surplus of $62.7 billion in trade with the US.

However, the achievement turned out to be the reason the US country labeled Vietnam a currency manipulator.

Prof David Dapice from Harvard's Kennedy School, who is an economist with 30 years of research in Vietnam, said during an USTR (US Trade Representative) online public hearing on December 29, 2020 that labeling Vietnam as a currency manipulator is unreasonable, and that the proposal to heavily tax Vietnam’s exports would be an economic blow to US allies in Asia, including Japan, Taiwan and South Korea.

The countries have invested tens of billions of dollars in Vietnam, which has not changed the actual value of its currency.

The US labelled Vietnam as a currency manipulator because of Vietnam’s growing bilateral trade surplus with the US. Vietnam’s export increase, however, was due to the heavy taxation by the US on Chinese goods.

The heavy taxation has prompted many Japanese, Taiwanese, South Korean and Singaporean investors to relocate their manufacturing bases to Vietnam.

The professor said the US tariff policy led to changes in economic considerations about where to set up production bases, thus leading to changes in FDI (foreign direct investment) flow. He said Vietnam does not overly devalue its currency.

First, the government of Vietnam is implementing measures to reduce the trade deficit, and fight against origin fraud and illegal transmissions.

Second, the government is determined to join forces with the US to implement an action plan towards harmonious and sustainable trade balance.

Third, Vietnam’s monetary policy aims to control inflation and ensure macroeconomic stability, and not to target a competitive position in trade.

With 15 FTAs having taken effect, Vietnam has a very open economy. It now has trade relations with over 230 markets.

Anh affirmed that industries continue to overcome difficulties in the context of supply chain disruption amid Covid-19. The added value of the industry sector in 2020 increased by 3.36 percent, higher than the average growth rate of the economy. Of this, manufacturing and processing industries had a high growth rate of 5.82 percent.

The number of first-class vendors of Samsung surged from 35 in 2018 to 42, and second-class vendors from 157 to 170. Three more enterprises have met requirements to join Toyota’s supply chain.

However, Phuc pointed out that exports still rely too much on foreign invested enterprises (FIEs). Exports by FIE enterprises account for 64 percent of total export value. Vietnam still has to import machines, equipment and input materials for domestic industries, accounting for 40-50 percent of total import turnover.

The COVID-19 pandemic has cast a long shadow and created uncertainty over the global economy.