Living far from their hometowns, overseas Vietnamese in Vladikavkaz, the capital city of the Republic of North Ossetia-Alania, Russia, are always turn their hearts to the motherland whenever the nation’s traditional Lunar New Year (Tet) comes.

Que Anh, Nhan Dan Newspaper correspondent in Russia, has captured the moment when overseas Vietnamese in Vladikavkaz prepare to celebrate Tet thousands of miles away from home.

After nearly two and a half hours of flying from Moscow, Beslan airport in Vladikavkaz gradually appeared. The small airport looks like many other airports in the federal subject of Russia along the Caucasus Mountains with many famous legends.

Mr. Tang Van Kha was waiting for us at the airport. He still keeps his strong accent from Binh Dinh Province – the cradle of Vietnam’s traditional martial arts, even though he has stayed in Russia for more than 30 years. Shaking our hands tightly, he excitedly asked for our names. The moments of first acquainting passed quickly.

After about 25 minutes of driving through the roads lined with sparse rows of bare trees on a typical Russian winter day, Kha introduced: "Here you are! We’ve arrived my home!" Opening the iron door, we entered the yard and several family members rushed out to greet and support us to unload our suitcases. Waiting for us in the cosy home that day were Kha’s sisters and brothers, who were hurrying to finish their Tet dishes. This year, Vietnamese Lunar New Year Festival and the Russia’s Old New Year (falling on the night of January 13 and the dawn on the next day) were relatively close together, so it seemed that Tet of the overseas Vietnamese in Vladikavkaz also arrived earlier. 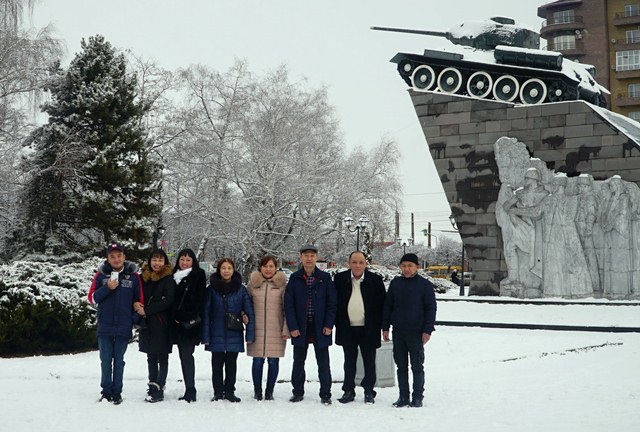 Their stories around the cosy table at the end of the year told us a lot about the ups and downs of the Vietnamese community in Russia. They all came to the host country under different conditions and circumstances. Most of them earn their living by trading clothes and working in the garment and textile sector. Moving through many lands and cities, they then gathered in southern Russia and stayed in Vladikavkaz. Many have entered their fourth decade here while some others have also been here for decades.

Vladikavkaz is a new city, so housing development is an indispensable demand of the local people. Grasping the practical needs, besides selling clothes in the local markets, the Vietnamese community here has also invested in construction and have harvested success.

By 2020, the Vietnamese community in Vladikavkaz has more than a dozen households with about 50 people who are traders in the local markets, in addition to nearly 100 others, mostly men, working as construction workers. In the time before Russia suffered from international sanctions, life was better with good incomes for the Vietnamese, whether they sold goods or worked in construction sector. At that time, the number of Vietnamese living in Vladikavkaz sometimes reached 2,000-3,000. However, over the past five years, Russia has been subject to sanctions from western countries, making life and business opportunities more challenging than before. Some Vietnamese, partly because of the above objective conditions, having accumulated some capital, have returned to their homeland to reunite their families. Those who stayed in Vladikavkaz all have legal residence papers, and they form a close community to care for each other like family members. More importantly, the local authorities as well as local residents in Vladikavkaz also appreciate and create favourable conditions for Vietnamese people to live and do business here legally.

Although an overseas Vietnamese association has not yet been established in Vladikavkaz like many other localities in Russia, Vietnamese expatriates here still unite to support each other. They call the Binh Dinh man, Tang Van Kha, their "elder brother", partly because he is the oldest among them, but more importantly because he is always willing to support the community and bring the Vietnamese people together. On every occasion of Tet, or whenever someone needs help, they always stand side by side.

Together with the community, Kha and other Vietnamese in Vladikavkaz have won the trust and respect of the local people. It brings pride to hearing the Russians here talk about their Vietnamese neighbours with the short sentence: "Vietnamese are so talented". That was the very sincere remark of Mr. Enbrus and his wife, who live in Vladikavkaz City, when they talked about the group of masons led by Mr. Nguyen Van Phan, from Vietnam’s Nam Dinh Province, who are repairing their house. When asked about his thoughts on the Vietnamese people who are fixing their homes, Enbrus confirmed without hesitation: “Vietnamese people are really hard working and very enthusiastic, with good construction techniques that complete the projects in a short time. We like it very much. They are really good workers!”

Arriving in the city’s market area, passing through any stalls, we also witnessed the happy faces and greetings from the indigenous people to their Vietnamese friends. Unlike many markets in Russia that in which Vietnamese people sell directly, in Vladikavkaz, most Vietnamese owners hire indigenous people to help them sell goods, resulting in better sales because sellers and buyers share the same language. Thanks to that, Vietnamese people can spend more time with their families and helping to raise their quality of life.

Kha’s wife, Ms. Tran Thi Loan from Ha Tinh Province, said she arrived in Vladikavkaz 30 years ago and, during the past three decades, she only returned to Vietnam twice to enjoy Tet with her family back home. However, she said: "Traditional Tet here is just like in the homeland." As Vietnamese have hired local people to sell goods, so they have the opportunity to focus on preparing the last meal in the last day of the lunar year to offer to their ancestors, as well as visiting their compatriots on the 1st and 2nd day of the Lunar New Year to extend Tet wishes to them. On the eve of the Lunar New Year, like all community members living far away from home, Loan expressed her desire for all to have a better year. 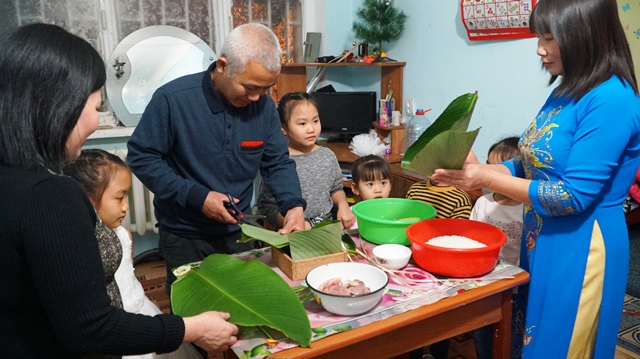 Making chung cakes for Tet gives great joy for Vietnamese children in Vladikavkaz who have never been home to celebrate Tet in Vietnam. (Photo: NDO/Que Anh)

It would not be enough to just talk about the bright colours in the picture of the Vietnamese community in Vladikavkaz. Admittedly, there are some difficulties, like in Mr. Loc - Ms Hong’s family, from Ninh Binh Province. Loc is a construction worker and his wife runs a small tea-shop in a local market. Loc said that, as they are still struggling to earn their living, they have not returned home for nearly ten years. Fortunately, their two daughters now go to school and know how to "translate" for their parents, making their lives much easier. We also met Mr. Diem, a man from Hai Phong City, who left his homeland more than 30 years ago. Up until now, he has not married and has also not returned home yet. All of them shared the same longing as they have not been able to bring their children to visit their homeland as their lives in Russia are still difficult. 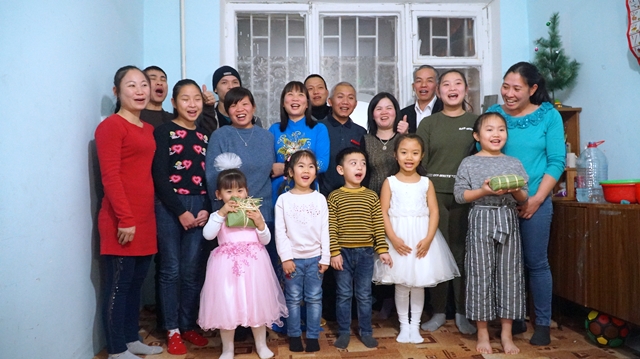 Lining up and shouting "Happy New Year" – Tet is just like that. (Photo: NDO/Que Anh)

On the afternoon of the last day of lunar year, gathering at Mr. Loc - Ms Hong’s house were the Vietnamese who have lived in Vladikavkaz for many years. They come from different localities in Vietnam but they gather in this country to make chung cakes together to offer to their ancestors and help their children, who have not been able to go back to their homeland yet, to learn about the nation’s traditional Tet holiday.

Sharing his thoughts on the verge of the Lunar New Year, the "eldest" brother, Tang Van Kha, said: "No matter where I go and what I do, I have a longing to return to our homeland". That is the wish of Kha and his wife, and also the wish of many Vietnamese people in Vladikavkaz. That desire is even more earnest every time Tet comes. Nhan Dan