Travel firms impatient because of slow resumption of international flights

International commercial air routes were reopened about a month ago under a Prime Ministerial decision.

But only three flight routes had started until the official decision on temporarily stopping international flights was made recently. 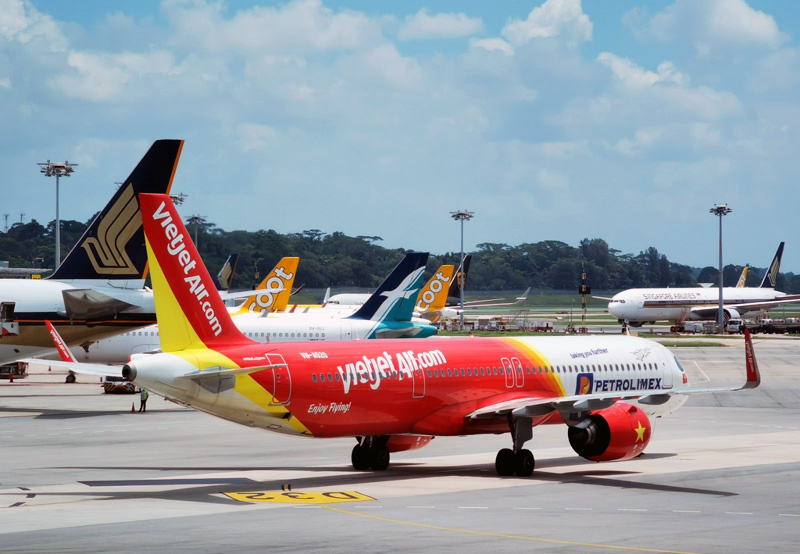 Nguyen Van Kien from Thai Binh province felt lucky when booking an air ticket from Seoul to HCM City with departure slated for October 7. However, he had to miss the wedding of his younger brother organized on October 18 because of the decision to temporarily stop international flights to Vietnam.

Prior to that, a flight carrying passengers to Vietnam on September 30 caused confusion at Tan Son Nhat Airport in HCM City because of a disagreement on quarantine plans in the city.

This led to the official decision on temporarily stopping inbound international flights while waiting for standard procedures on quarantine.

Soon after the government agreed on reopening international air routes on September 15, Vietnam Airlines and Vietjet, the air carriers appointed to implement flights on the routes, got ready to resume flights.

On September 19, the first routine international flight from HCM City to Japan occurred. On September 25, the first flight carrying passengers from South Korea to Vietnam was provided, and the next flight was organized on September 30.

As such, only two flights with nearly 300 passengers from South Korea have been provided since the government decided to reopen international air routes.

Pham Trung Luong, former deputy director of the Tourism Research Institute, said in early September, when the proposal on reopening international air routes was put into discussion, the Ministry of Transport (MOT) and relevant ministries should have met and come to an agreement on national epidemic prevention control.

“But now we are still busy dealing with the problem and cannot build a procedure for application, which shows a lack of cooperation among involved parties,” Luong said.

The reason behind the tardiness, according to the expert, is also due to the lack of transparency.

“We still don’t have a standard process for state management agencies, as well as commitments from hotel owners to receive passengers in quarantine,” Luong said.

Luong Hoai Nam, an aviation expert, thinks that Vietnam needs to negotiate with countries that have controlled Covid-19 to create safe ‘travel bubbles’ as soon as possible with very strict, clear and transparent principles.

The resumption of international air routes and tourism needs to be substantial, while the flight frequency should be high enough and the number of passengers large enough to be efficient.

Nam went on to say that it is necessary to be cautious when resuming international flights and reopening the tourism market, but this doesn’t mean ‘do nothing'.

Opportunities may be missed

Though problems still exist, Thailand, the big rival of Vietnam in attracting foreign travelers in the region, has grabbed opportunities to provide tours with a 14-day quarantine.

Phuket has been allowed to receive international travelers under a safe and closed procedure. Travelers can stay in Phuket for at least 30 days after the 14-day quarantine period at resorts,

Meanwhile, Singapore and Hong Kong, two major aviation centers in Asia, have reached an agreement on the establishment of the first safe tourism corridor in the region. Under the agreement, people traveling between Singapore and Hong Kong won’t have to be isolated if they can show certificates that they tested negative for SARS-CoV-2.

These are bilateral or multilateral agreements which clearly define the responsibility and the documents that travelers must have to ensure safety.

Only when the opening of international air routes is based on such detailed agreements will confidence about safe travel return, he said.

Nguyen Duc Chi, former deputy head of the Travel Division of the HCM City Tourism Department, suggested that airlines collect in advance the fees passengers have to pay in Vietnam, such as fees on testing, accommodations and in-land transporation.

After fulfilling testing procedures and making payment for compulsory fees, they will then be allowed to buy air tickets.

The fee collection in advance will help avoid unexpected events. If passengers pay fees at the airport and choose a hotel, they may change their mind later at the airport, thus causing problems.

Sometimes, you have to pay a lot of money in exchange for an interesting experience for a few minutes.

Provinces in the southeast region have agreed to participate in a tourism stimulus programme that will help reduce locals’ anxiety when travelling.