Special lessons given at border markers to local students

At 5 am, the fog still covered the mountain surrounding the Huong Lap Frontier Post. But the teacher, a border officer, was already correctly dressed in uniform, reviewing the lesson plan in a preparation for his teaching period in the field. 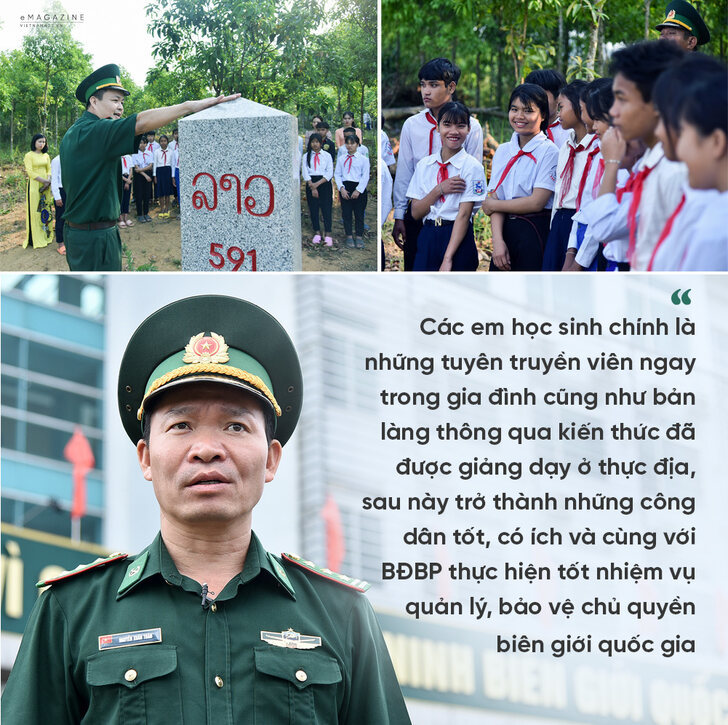 The teaching period in the field

At Boundary Marker No 591, the students at the Huong Viet Primary and Secondary School in Huong Hoa district of Quang Tri province would have a special lesson – the border lesson.

It was a sultry morning in April, but the heat could not distract the students from the lesson given by Major Pham Quang Luu, deputy head of the Huong Lap Frontier Post, the teacher in the green military uniform.

Many activities are typically organized for the ‘border lesson’ model. Teachers give lessons at school online and offline, take students to visit the boundary marker, or even arrange patrol trips for them on borderline sections.

“When we have teaching periods in the field, we always prepare lesson plans very carefully. We have to have sufficient legal knowledge to teach students the issues related to the laws,” Luu said.

“Our teaching method provides legal knowledge in a way so that students can understand it easily. We have to make thorough preparation with different teaching aids, including e-lesson plans and visible images,” he said.

“We won’t go the wrong way”

“Do you know what it is? Luu asked. “It is the boundary marker,” students replied.

“You are right. This is Boundary Marker No 591 on the Vietnam-Laos border managed by the Huong Lap Frontier Post,” Luu said.

“From the center of the marker towards the side with Vietnamese words is our beloved country; while the other side with Lao words is the neighboring country - Laos. We will violate the border sovereignty if we just take half a step towards the other side,” he continued.

According to Luu, over the past years, along with the task of defending territorial sovereignty and national border security, Huong Lap’s officers have been trying to reform the methods of dissemination and education about laws to local people.

“Through these activities, we found that local students still lack basic knowledge about the border line and boundary marker,” he said.

The frontier post has been joining forces with schools to organize extracurricular activities called ‘border lessons’ to introduce the work of defending national border, provide knowledge about border and territory; talk about the harmful effects of drugs and the work of preventing drug trafficking; and explain basic issues in border management and protection, border regulations and agreements, the National Border Law, and cross-border trafficking of women and children.

The special lessons help students understand the benefits, obligations and responsibilities of people in border areas, and the regulations on entering or going out of border areas. The knowledge helps raise students’ awareness of border protection, boundary markers, and encourages them to actively participate in the prevention of crimes and social evils. Students also understand the work of border officers and soldiers.

Ho Tra My, a Van Kieu ethnic minority student, said the soldiers teach them how to recognize border line and the examination procedure at border gates.

“Today, we learned where the boundary between Vietnam and the neighbouring country of Laos is. We understand the sacrifices and struggle of uncle soldiers who day and night guard and defend the territory,” she said.

“We understand that we should not go back and forth arbitrarily, not marry illegally, and not go the wrong way. We also understand that protecting border markers is the task of everyone, including students, teachers, soldiers and all Vietnamese,” she added.

Nguyen Thi Thuy Phung, Deputy Headmaster of the school, said the teaching model has been applied by the school and the frontier post for the last three years.

The soldiers at the frontier post not only give lessons in the field, but also often come to the school to provide knowledge about laws, national sovereignty, and the struggle against social evils, drugs, and trafficking of women and children.

At first, students were taught the Border Defense Law and knowledge about borderline and boundary stones. Later, the content of lessons was expanded with field trips organized for students, so that they can witness daily activities of soldiers.

“The students, with knowledge received during the lessons, will be the propagandists in their families and hamlets, and become useful citizens, together with Vietnam Border Guard to implement the tasks of managing and protecting national border sovereignty.

“The model is being applied by all frontier posts of Quang Tri province,” Toan said.

The field lessons not only help students grasp knowledge of history, but also build national pride and help them understand the sacred value of territorial sovereignty so they will actively participate in protecting sovereignty and border security, and contribute to building a border of peace, friendship and development cooperation.

Soldiers protect the border to prevent spread of Covid-19

The border force has implemented flexible, practical, and effective plans to raise local people's awareness about crime prevention and to create trust among people for border security.

Vietnam’s sovereignty over archipelagos throughout history

Vietnam was the first country to have established sovereignty over the Hoang Sa (known as Paracel) and Truong Sa (Spartly) archipelagos when they were unclaimed territories.