Having recovered from Covid-19, Mai Anh Duc is now directing the production of hand sanitizer and disinfection machines to donate to hospitals and isolation areas in the country. 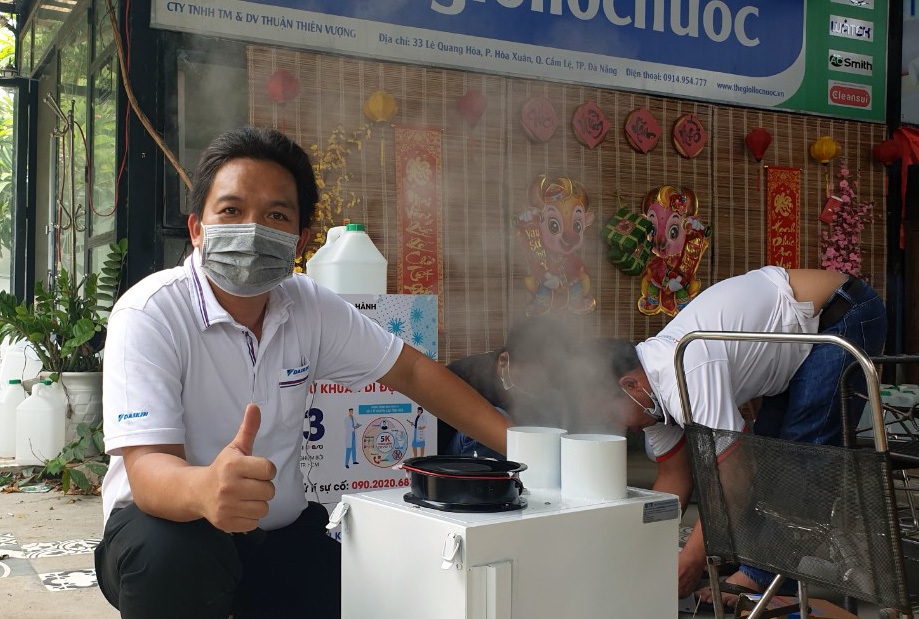 In July last year, Mai Anh Duc, 39, from Da Nang City, and his 13-year-old son tested positive for nCoV. One year later, he returned to hospitals and isolation areas as a benefactor donating sanitizer and disinfection machines. The machines were labelled as products of Group 687, Duc’s patient code one year ago.

Duc said he had the idea of producing sanitizer before he became a Covid-19 patient. As an electrical engineer and trader of imported water purifiers and air conditioners, Duc has knowledge about the manufacturing of these products.

Last summer, when Da Nang became an epicenter, he considered a plan to produce sanitizer to donate to hospitals and isolation wards.

He borrowed antiseptic-liquid creating equipment from a friend of his in HCMC. The equipment is certified as friendly to the environment, not harmful to users’ health, and the disinfection capability is up to 99 percent.

However, when the machine arrived in Da Nang, he received the news that his son was positive for nCoV. Therefore, all his family members were put under concentrated quarantine.

The machine had to go back to HCMC. The next day, he was informed that he had become a patient and was brought to Hoa Vang Field Hospital for treatment.

During the 10 days at the hospital, he could clearly see the hard work and dedication of the medical staff.

“On the night when I had a high temperature, doctors seemed to stay up with me. Though I took antipyretics, every once in a while, someone came in and asked about my status. I felt touched about the attentiveness of the medical team,” he said.

Duc could not see the faces of medical workers because all of them were in tight protective suits. However, listening to their voices, he understood that they had come to Da Nang from many localities to help Da Nang fight the outbreak in the emergency period.

When Duc was at the hospital and quarantine area, Duc received a lot of gifts, toothpaste tubes and soap. The gifts touched him and prompted him to do something for the community.

From the hospital, Duc called his co-workers and asked them to immediately begin production of sanitizer from the machine his friend had sent to him from HCMC for the second time.

When he got the negative result for the third time and spent quarantine time at home, the first bottles of sanitizer were put out. About 60,000 liters of sanitizer were sent by Group 687 to hospitals in Da Nang, isolation wards, check-points, schools, the Vietnam-Laos border area in Quang Nam and the northern provinces of Hai Duong and Bac Giang.

Later, Duc realized that the disinfection chambers were cumbersome, which made it difficult to move. Duc decided to make mobile disinfection machines with production cost just half of the initial cost.

With financial support from benefactors, Group 687 has created eight machines to donate to Bac Giang. They are now making another 20 machines to the order from the Disaster Prevention Community Fund. Ten machines will be sent to Bac Giang and the other 10 to Bac Ninh.

The next order for 20 machines is from the Mai family in Vietnam. They ordered the machines to donate to units in the Covid-19 fighting forefront.

The disinfection machines made by Group 687 operate under the automatic spraying mechanism thanks to sensors. Wheels are attached to the machines which allow it to move easily. The machine frame is at the bottom, while the antiseptic solution container is above.

According to Duc, the production cost of a machine is VND8 million, just half of that of a disinfection chamber.

Two schoolboys in Binh Duong have created an automatic body temperature measurement machine that can also be used to disinfect hands and take the roll-call. The machine is being used at their school.