Vietnam's online game market still has not seen a breakthrough policy that would allow it to develop well, even though it began developing more than 15 years ago. 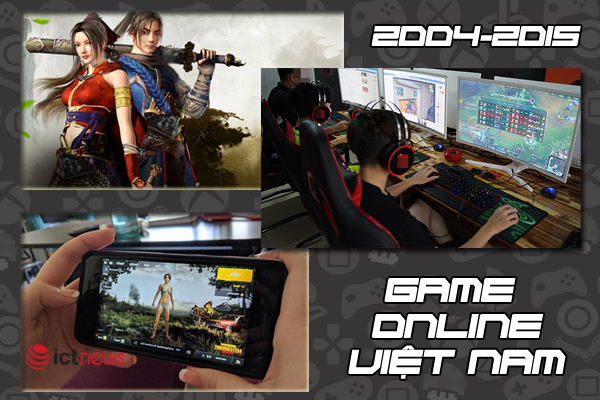 In late 2004, Asiasoft released the first copyrighted online game in Vietnam, marking an unprecedented boom for online gaming in Vietnam. Since that time, Vietnam's online game market has been flooded with products of foreign origin.

There was a time when online games flourished in Vietnam with millions of subscribers and hundreds of thousands of concurrent users (CCU) with dozens of servers operating at full capacity for just one game. But the online game industry in Vietnam has yet to make a breakthrough and increasingly depends on cooperation with foreign partners, resulting in unpredictable consequences.

In the early days, the online game business was a fairly new model in Vietnam. Game service providers were confused about how to collect money from players until the free-to-play model was clearly formed.

Game publishers began seeing the potential of an undiscovered entertainment market and massively imported foreign games for domestic release. At that time, the shorter the release and the shorter the payback time, the faster the game and the market share expanded. Subtracting expenses such as royalties, revenue sharing, commissions, marketing and operations, the game service providers could still keep about 15-35% of the pre-tax revenue.

With millions of players, even if only 10% accepted to pay money, it is estimated that the revenue of the online game market in the early period amounted to hundreds of millions of USD, with an average growth of 30% per year.

In the stage when the Vietnamese game market was divided into “client” and “web game”, the market still grew well and did not lose too much revenue to third party distribution stores such as App Store or Play Store.

In the past five years, when mobile games boomed, costs increased while revenue began running abroad, but the market overview still grew strongly when players tended to spend more money. A Niko Partners report estimates that in 2019, the total revenue of the online game market was $477.6 million from the PC market and $263 million from the mobile market. The mobile segment alone increased by 50% over the same period last year, although this number may not be completely accurate and will be discussed later in this article.

After more than 15 years, a fresh startup of 'game-lovers' has now become a company with total assets worth more than VND7,300 billion, according to VNG's financial report for the first six months of 2020. This proves that online games is an industry that spawns golden eggs and can generate billion USD unicorns if they are invested and developed in the right direction.

The lack of a development path is why Vietnam's online game industry is passive and completely dependent on foreign partners. It is also this partnership that has created negative aspects in the industry. For example, a game issuer did not pay for the game developer, and vice versa, the game developer received money but delivered defective products or did not deliver products.

The worst aspect is that domestic cash flow is flowing abroad through the form of cooperation and purchase of game copyrights to issue. Foreign partners receive about 10% of revenue from local game issuers plus a huge amount of royalties. In fact, accepting a high revenue share, the local publisher can negotiate low royalties.

This does not include the fact that due to lack of cooperation, domestic game publishers have to buy game copyrights at high prices, which only benefit foreign game developers.

According to the Ministry of Information and Communications’ statistics in May 2020, 87% of online games legally released in Vietnam are developed abroad, of which 69% come from China. This is the latest.

However, there are no statistics to show how much the game issuer has to pay to foreign partners. Today, in addition to royalty fees, mobile games released on online stores such as Play Store or App Store also bear an exorbitant 30% fee. That is why Vietnamese publishers have to find a way to 'circumvent the law' to popularize the form of loading on the website, through domestic payment intermediaries.

This inadvertently causes the statistical results of the Vietnamese mobile game market to be inaccurate. Market research companies such as Niko Partners, Sensor Tower and App Annie provide figures based on analysis of official metrics on the App Store or Play Store or transparent financial reports, but they cannot figure the revenues from these 'tricks' .

In such a situation, management has been a widely discussed issue for the past 15 years, which will be discussed in a subsequent article.

As of the end of August 2020, the number of new games that were launched and closed in the domestic market showed improving signs compared to the same period last year.

Amid the Covid-19 pandemic, the Vietnamese game market in 2020 developed as the number of new online games increased, while the number of closed games decreased significantly.

As observed by ICTnews, as of the end of August 2020, the domestic game market welcomed 96 new released games, up 23% over the same period last year. Funtap suddenly took the lead with 14 products, and VNG ranked second with 11 products, followed by Gamota and SohaGame.

Thanks to the policy of loosening the licensing and censorship of script content, Vietnamese game publishers have been able to speed up the product launch progress, as well as offer domestic players more options.

However, most of the games still werefrom the top "new four" publishers, including VNG, Gamota, Funtap and SohaGame. Other small publishers had a fairly limited number, only about 2 - 3 games.

Notably, the once leading brands of the Vietnamese gaming industry, including VTC Game, VTC Online and VTC Mobile, operated moderately, holding only a few new products. In July 2020, after the closure and transfer of the distribution rights of game Dot Kich to VTC Online, VTC Game now has several games left.

The number of games that close each year depends on many factors. But the ratio of new games that were launched to closed games shows the stability of the market in 2020.

The richest self-made streamers in Vietnam

With stable incomes during the Covid-19 pandemic and large fanbases, streaming is a job pursued by many young people, but only a few are hugely successful at this moment. .

Use of pirated games, including unlicensed games, and cross-border distribution have seen a decline in Vietnam.