When delivering the closing speech at the NA session, NA Chair Vuong Dinh Hue expressed his belief that newly elected deputies will uphold the spirit of dynamism and creativity, and will dare to think, dare to do, and dare to take responsibility. 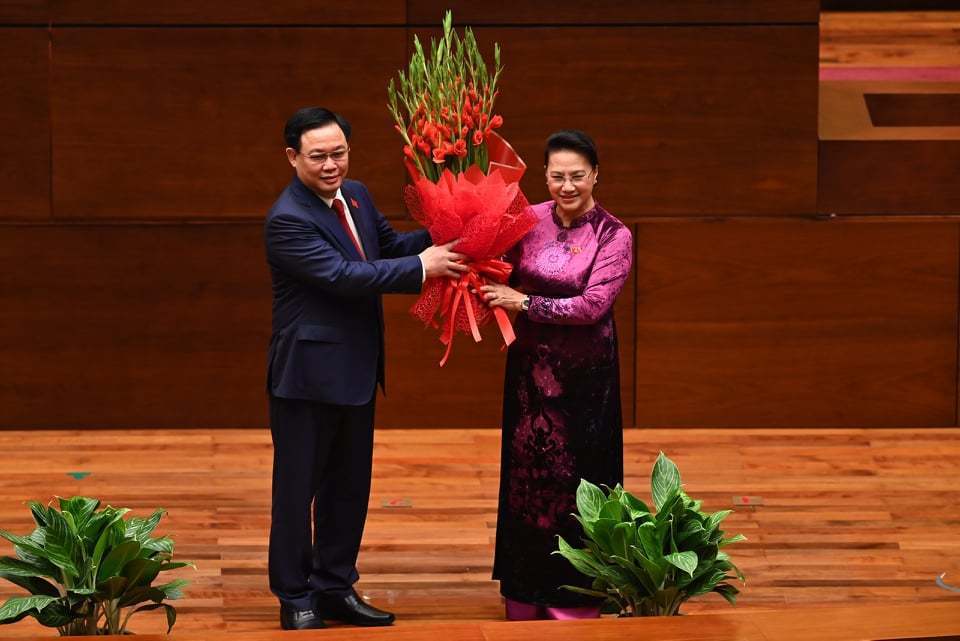 The foundation of belief

The ‘belief’ of the 14th National Assembly (NA) is also the great responsibility and pressure placed on the shoulders of Hue as Chair of the NA, one of the three key positions which have been elected to administer the country in the next five-year period.

Under the management of previous chairs, including Mrs. Nguyen Thi Kim Ngan, Mr. Nguyen Sinh Hung and Mr. Nguyen Phu Trong, the NA’s activities have become more practical and effective. The rights of NA in general and NA deputies in particular have been increasingly strengthened through legislative and supervisory activities.

Mr. Hue’s predecessor – Nguyen Thi Kim Ngan – was a flexible chair who was moderate sometimes and drastic at other times when presiding over working sessions.

The 13th NA enacted 72 laws, two ordinances and a number of resolutions, many of which aim at promoting the development of the socialist-oriented market economy and respecting the freedom of doing business; accelerating judicial and administrative reforms, building a Socialist State governed by the rule of law; and promoting democracy and the people's right to mastery as self-assessed in the 13th NA report.

Of these, the most significant laws that help perfect the market economy regime include the Investment Law, Enterprise Law, Law on Credit Institutions, Law on Investment in the form of PPP.

The contributions by the 13th NA to the legislation were remarkable, but they still could not remove all institutional bottlenecks. The ask-and-grant mechanism and unreasonable business conditions still exist; back-door business has been mushrooming; the state-owned economic sector still consumes big resources but operates ineffectively. And the private sector still bears discriminatory treatment and cannot grow.

As such, the institutional bottlenecks, as shown in the two reports presented at the 13th Party Congress, still have not been removed to facilitate the smooth and effective operation of the market economy.

The report says the awareness of the socialist-oriented market economy in some content is still not profound, especially in the relation between the State and the market, land ownership, resources allocation, relations between fast and sustainable growth, the role of state-owned enterprises, collective economy, cooperative, private enterprises… The socialist-oriented market economic institutions are not complete, modern and integrated, and atecunable to keep up with development requirements.

NA Chair Vuong Dinh Hue, who was head of the Central Economics Committee, put high hopes on heightening ‘awareness’ through laws, ensuring the smooth operation of the market and reasonable resource allocation, so that resources are not allocated through administrative commands.

How will the Land Law be amended? Will a property tax law with progressive taxation be considered?

The NA is the legislative body, but 90-95 percent of draft laws are compiled and submitted by the Government. This mechanism is common globally because after all, the legislative right of the NA is the right to pass laws, according to Nguyen Si Dung, a respected expert.

However, a survey conducted on the occasion of the amendment of the Law on Promulgation of Legal Documents found that draft laws, after being submitted to the NA, are amended up to 70 percent.

Does the NA have the right to replace a legislative policy proposed by the Government with another policy? The answer, according to Dung, is no.

This, according to economist Nguyen Dinh Cung, leads to the fact that some laws, including the Enterprise Law, face the ‘8-no’ risk: not specific, not clear, not systematic, not reasonable, not transparent, not predictable, not effective, and not valid.

A high-ranking official once elaborated on the issue: “When building institutions, we often create barriers because we do not properly understand the roles and functions of the state and the market; do not understand what state management is, and which tools to manage with."

“In many cases, we first install barriers, and then try to amend regulations when seeing problems. Every amendment is considered a reform. Imagine that the water is flowing and we fill up the current with rocks, which causes the water to slow down and get stuck. After that, we remove the rocks and the water flows smoothly once again. And we call this reform,” he explained.

Removing the bottlenecks will need the bravery and wisdom of the new NA Chair, and a more professional NA as well. According to the Law on Organization of NA, "the number of full-time delegates at least 40 percent of the total number of NA deputies" will greatly assist in the work of legislation.

Vuong Dinh Hue takes over a fairly sustainable heritage. This is a stable macroeconomic foundation with lower public debts, bad debts and inflation rates, which are the premise for people and enterprises to make investments and do business.

He was formerly Minister of Finance and Deputy PM in charge of economic issues, so he is expected to maintain and consolidate the foundation.

There is another problem that Hue needs to deal with immediately – promoting the development of large-scale public works, including Long Thanh International Airport and North-South Expressway which all use the state’s capital. Balancing the efforts to "stabilize to develop" and "develop to stabilize" will not be an easy task.

Mr. Hue, former Minister of Finance, Head of the Central Economics Committee, Deputy PM and Hanoi Party Committee Secretary in the last two NA tenures, has a lot of experience, knowledge and energy to lead the NA and solve institutional problems in order to ensure citizens’ rights and help enterprises and people feel secure to do business.

Holding only one vote, but Hue will lead and administer the next NA tenure to fulfill the wish of President Ho Chi Minh on the rule of the spirit of the law to serve the ultimate purpose "the people are rich, the country is powerful".

Vuong Dinh Hue, Politburo member and Secretary of the Hanoi Party Committee, was elected as Chairman of the National Assembly (NA) and the National Election Council (NEC) at the 11th sitting of the 14th legislature on March 31 morning.

Having "gone through the mill" when he was Minister of Finance, Deputy PM, and Hanoi Party Committee Secretary, Vuong Dinh Hue has left an impressive legacy as a leader who took serious action on many matters.