With Mobile Money, people in mountainous areas or islands can remit money and make payments for goods and services through SMS on their mobile phones. 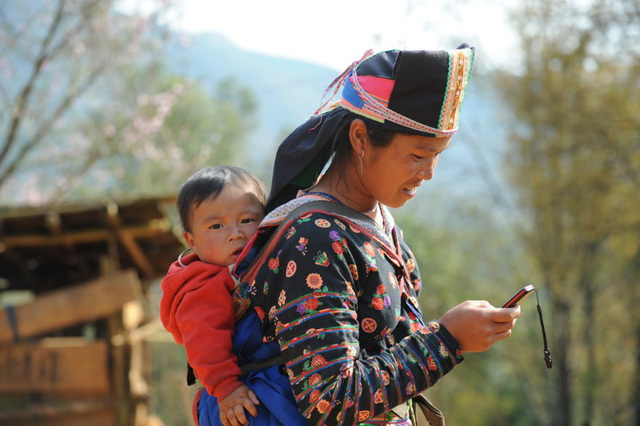 Lo Thi Chien calculated in her head that she could save VND500,000 last month. Chien and her husband are from Dien Bien. They live in a rented room in Hanoi and earn VND15-16 million a month from their jobs.

They have to work hard, but their jobs bring income much higher than growing maize in their home villages. They only return home once a year, bringing the money they save for one year to cover the needs of their old mother and four children.

Living and working in Hanoi, Chien doesn’t have a bank account and she doesn’t have time to go to banks to remit money.

“We don’t remit money via post services, because my old mother and small children cannot reach the district to receive money,” Chien explained.

Do Thi Van in Thanh Hoa province earns her living by growing fruit and doing fieldwork. Her daughter has been studying at a university in Hanoi for the last two years and she has to fund the study.

Like Chien, Van doesn’t have a bank account. “My daughter tells me to open a bank account to remit money more easily. But I don’t need a bank account, because I don’t run a big business,” she said.

“When my daughter asks for money, I send it through coach drivers. She needs to go to the coach station to get the money,” Van said.

Both Chien and Van were excited after hearing about Mobile Money, though they still don’t understand it.

“The service is really good. I am far away from home and I don’t have time to return home regularly,” Chien said.

Meanwhile, Van feels happy about the service because her daughter will no longer have to go to the coach station to get money.

People without bank accounts will be the important clients of Mobile Money. Ninety percent of Vietnamese people have mobile phones, but only 50 percent have bank accounts. More than 90 percent of transactions with small value of less than VND100,000 are made in cash.

This will be the future of Mobile Money, especially in rural and remote areas where people rarely use Points of Sale and ATMs.

The Prime Minister has decided to permit Mobile Money, or payments made for less valuable goods and services via telecom accounts on a trial basis for two years.

The decision stipulates a maximum transaction limit of VND10 million a month for each account for all transactions.

Mobile Money allows people to receive, store and spend money from mobile phone accounts from anyone and anywhere with cellphone signals, and without any intermediaries. In areas with no internet connection, people, including feature phone users, can use their Mobile Money accounts to make payments via SMS.

Mobile Money will help promote financial inclusion by providing a payment channel which is convenient and safe.

Nguyen Thi Nga, the owner of a grocery in Linh Dam new urban area, said that with payment in cash, she has to prepare small change every day to give to buyers, and she has to count money when selling goods. But with Mobile Money, she won’t have to do these things.

Le Thanh Hung in Ba Dinh district in Hanoi said Mobile Money has a number of advantages as it has created a system of accounts, helping promote financial inclusion.

“You can pay for shoeshine service or cup of coffee with Mobile Money and don’t have to pay an annual fee to maintain credit cards,” he said. “On holidays, you can go to stores to get cash instead of banks or ATMs."

A report about Mobile Money by Can Van Luc and his research team from BIDV says that there is still space to develop non-cash payment in Vietnam. The development of modern payment methods is one of the government’s important goals in its financial inclusion strategy.

Lo Thi Chien said she and other ethnic minorities don’t have a clear understanding about modern payment methods, but want advice on how to use the service effectively.

Meanwhile, Hung wants service providers to deploy the service at many points to make it easier for people to use. E-wallets came out earlier than Mobile Money, but it is still not popular because each e-wallet uses its own code and is not accepted at many stores.

Luc said that to minimize risks, there must be regulations requiring an authentication code, PIN or password when carrying out transactions on mobile phones.

BIDV’s report also pointed out that there are risks. Mobile money accounts are identified through subscribers’ numbers, and ‘trash sims’ still exist, which may turn this into a ‘money washing channel’ if it is not controlled well.

Mobile Money on a trial basis will create a precedent for applying the sandbox mechanism to other services and new professions to appear in digital society.

The prime minister has approved the pilot application of Mobile Money, which allows the use of mobile phone accounts to pay for small-value goods and services. The decision takes effect from March 9, 2021.