Nguyen Vuong Linh said once you have passion for something and have the ability to do something, you should find an environment where you can promote those skills. Don’t think that you need to go to Google/Facebook/Amazon just to prove your worth.

Linh won the gold medal at the 23rd International Olympiad of Informatics (IoI) organized in Thailand in 2011. 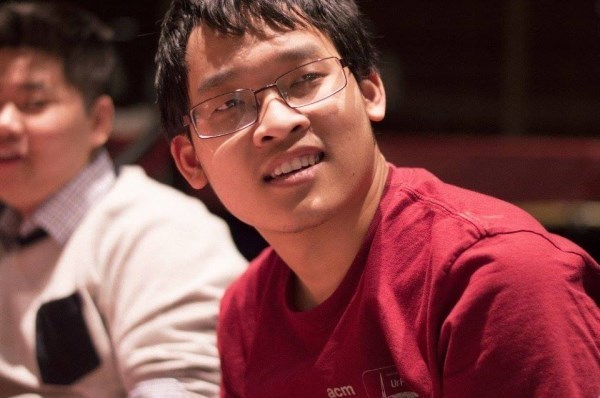 This was a valuable medal for Vietnam, which had not won a gold medal in informatics at international competitions for seven years.

After finishing high school, Linh chose to study at the University of Technology, a member school of the Hanoi National University.

Linh searched for information about opportunities to study abroad on the websites of famous schools and asked for advice from seniors. However, as his English was not good at that moment, he had to spend one year in preparation.

Arriving in the US in August 2013, the young man from Hanoi met two challenges at the same time. He had to both adapt to the conditions in the US and at MIT – an internationally leading academic environment.

“MIT is great in engineering and technology. I had the chance to meet a lot of good friends and teachers. However, the workload was heavy and I had to try my best to catch up with the pace,” he said.

Linh understood that in the new environment, he not only had to study, but also practice skills useful for his future job. He then tried internship opportunities at US companies.

“They don’t attach too much importance to what you study at school. I can obtain important knowledge at work,” he said.

Linh obtained both a bachelor’s and master’s degrees at MIT after just 4.5 years.

When Linh was a fourth-year student and still could not decide whether he would go look for a job or continue studying after he got his bachelor’s degree, he applied at some companies, including the one founded by a professor at his school.

He met the professor at an interview and they came to an agreement that instead of following a 3-month internship as usual, his internship would last six months and the topic would be the foundation for his master’s thesis, he said.

The project Linh implemented was named ‘Cambridge Mobile Telematics’, which aimed to collect telemetry data to assess how safely people drive their vehicles.

In March 2018, Linh decided to choose Facebook as his destination after finishing school, where he developed software to manage and optimize data centers for Facebook.

“With big data at Facebook, they cannot use cloud platforms provided by other companies (such as AWS or Google Cloud). They have to build a system of their own, so they need engineers to build such a system,” he explained.

Linh liked mathematics when he was 4-5 years old. He could add and subtract, and remember phone numbers and license plate numbers before he could read. He said his greatest luck is that his parents were concerned about his study, but always gave him the right to determine his way.

Linh said he was shocked when he was a student at the High School for the Gifted majoring in Natural Sciences and failed the competition to enter the school’s team of the most excellent students at mathematics.

However, it was that failure which ‘encouraged’ him and made him determined to study information technology. This helped him win the IoI gold medal later.

“The failures taught me a lot of things. Most importantly, I can keep myself calm in all conditions,” Linh said, adding that he once suffered from stress during his study for his master’s degree, when there was too much work and he had some personal problems.

After completing his thesis, Linh spent two months to think about his goals. The young man decided to seek another job which was different from what he had done.

“I won’t let anything set limitations on what I can do. When the environment and goals change, I will change myself accordingly,” he said.

All eight Vietnamese students from Hanoi-Amsterdam High School for the Gifted have claimed medals, including five golds, one silver, and two bronzes, at the fifth International Olympiad of Metropolises (IOM).

All five students of the Vietnamese team participating in the International distributed Physics Olympiad (IdPhO) 2020 have won medals, with four silver and one bronze.