and develop an ecosystem for the automobile industry.

It is expected that by 2025, Vietnam will be able to make highly competitive supporting products, satisfying 45 percent of the demand for domestic production and consumption. The figure would be 70 percent for 2030. 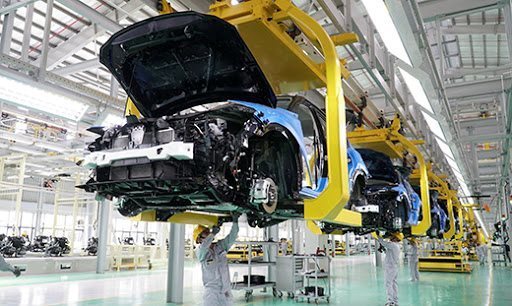 Also according to the Ministry of Planning and Investment, some foreign investors have recently expressed their interest in Vietnam’s automobile industry and are awaiting new moves from management agencies.

This is an opportunity for Vietnam to develop an automobile industry. At present, Vietnam’s automobile support industry remains very weak. Auto manufacturers mostly import car parts to assemble them domestically.

In the supply chain, there are only 18 first-class car part vendors and 58 second- and third-class vendors, providing simple and more complicated components such as chairs, batteries and plastic components. Some of them provide both car and motorbike parts.

The car parts that can be made domestically and are competitive in quality and prices with imports are mostly simple labor-intensive parts. Meanwhile, most of the other parts and sets of parts have production costs higher than those made in Thailand or Indonesia.

According to Toyota Vietnam, domestic enterprises quote a price of $4 for a fuel tank cap, nearly twice as much as Thailand’s products. The 200-300 percent gap in production cost is also seen with plastic components.

Analysts believe the small size of the market is the major reason behind the underdevelopment of the supporting industries. Automobile manufacturers are running production at a capacity much lower than the designed capacity.

In theory, 10 automobile manufacturers can produce up to 500,000 products a year, but they are running at just 50 percent of the capacity.

Because of low output, the amortization cost per production unit is high. Therefore, the prices of domestically made car parts are usually higher than imports.

The scale of the automobile industry in Vietnam is still small, and this is attributed to high taxes and fees in the context of personal low incomes.

Luxury tax and VAT account for 40-60 percent of the selling price of domestically assembled cars.

Meanwhile, CBU (complete built unit) imports from ASEAN countries are enjoying a preferential tariff of zero percent. As a result, more imports have arrived, competing with domestically made products.

According to the Vietnam Automobile Manufacturers’ Association (VAMA), Vietnam’s automobile market in 2019 grew by 12 percent compared with the year before.

Eleven domestically assembled car models currently have output of 6.000-27,000 products per annum. Toyota Vios is Number 1 with 27,000 products a year, just 1/8 of Thailand’s. The small output is a reason behind the difficulties for the automobile industry.

In order to develop an automobile ecosystem, MPI has designed a solution with a focus on developing a healthy automobile market, and stepping up domestic production and assembling of cars and developing supporting industries.

The automobile industry can only develop when there is a market large enough, and the market opportunity should be reserved for domestic manufacturers, not imported products.

In order to do this, the infrastructure system needs to be developed. The ministry has also mentioned the possibility ofappmying trade remedies if car imports increase too sharply.

Analysts said Vietnam needs to set up policies that will help increase annual car output. This includes tax incentives to manufacturers to help them reduce selling prices, and financial support to those who buy domestically made cars.

Vietnam has opened its market doors widely to imports, but it still has not set up policies to protect and support domestic production. The idea to offer preferences in luxury tax to domestically created added value has been discussed but not applied.

What should automobile manufacturers do – import cars for domestic sale or assemble cars domestically? They prefer the second solution, though the first brings higher profit.