While the HCM City market has remained quiet since the Covid-19 outbreak, land prices have been increasing in the neighboring markets of Dong Nai, Long An and Binh Duong.

A recent report of the Vietnam Association of Realtors (VARS) said the development of Long Thanh International Airport in Dong Nai and the development of Thu Duc City, plus new roads and bridges connecting the southeastern provinces region with HCM City, have led to increased activity in the real estate market. 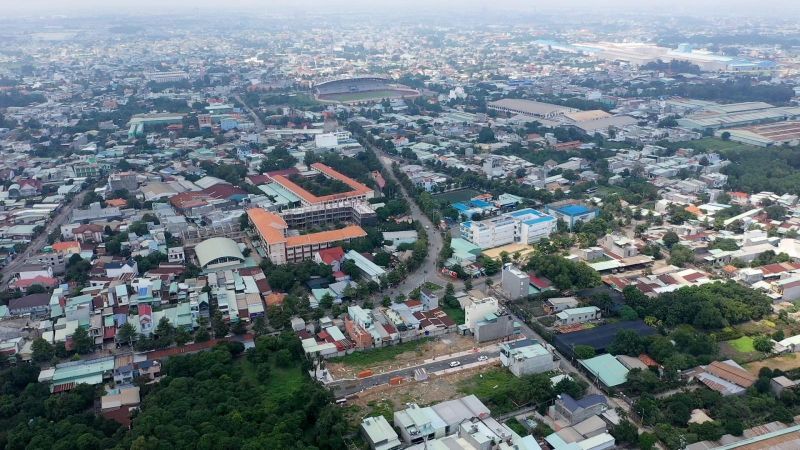 In Binh Duong province, the cities adjacent to HCM City which have potential for economic development such as Thuan An and Di An have become lucrative land for realtors to develop affordable apartment projects. This is a product HCM City lacks.

VARS reports that the apartment prices in Binh Duong increased sharply in 2020, despite Covid-19, from VND25-30 million per square meter to VND30-35 million, or 15 percent.

In Dong Nai province, contiguous to the eastern part of HCM City, also has seen land prices escalating, especially thanks to the development of the Long Thanh Airport.

The real estate market in Ba Ria – Vung Tau province is also hot as it is adjacent to HCM City and has great potential to develop tourism.

After a lot of ups and downs, the market has become stable. Thanks to effective management by local authorities, the land prices there have been stable, now hovering around VND10 million per square meter.

Can Tho, which is further from HCM City than other markets, was quiet in the first half of 2020 but was unexpectedly busy in late July when the outbreak was controlled.

The projects are well invested, with good infrastructure conditions and sufficient legal status (land use right certificate), and have been selling well.

It is estimated that about 500 land products have been marketed.

The products of projects launched recently in Long An show that the lowest price is VND15-20 million per square meter.

The prices of over VND20 million are seen in some projects in Nhon Trach area of Dong Nai.

In Long Thanh, where the construction of Long Thanh Airport has kicked off, the prices have escalated to VND20-35 million per square meter.

In Phu My of Ba Ria – Vung Tau, the land prices are over VND 10 million.

According to VARS, the land prices in many suburban districts have increased because of information that the districts will develop into inner city’s districts. The transparent urban area development planning also makes the areas more attractive to investors.

The association noted that investors have appeared in rural areas, which has pushed up land prices there. In some areas, the prices have soared from hundreds of thousands of dong per square meter some years ago to several million of dong.

In HCM City, because of short supply in the context of high demand, the apartment prices have surged rapidly. Because of the short supply of project products, investors are seeking to buy land in the suburbs, pushing prices up in the districts of Binh Chanh, Go Vap and Cu Chi.

Experts say the suburban market is getting hot because of the limited supply in HCM City. The better conditions of infrastructure conditions in many districts of HCM City have also helped the prices in neighboring areas increase.

The HCM City Real Estate Association also commented that investors are flocking to the suburbs and neighboring areas of HCM City because land in the central area is getting exhausted.

Investing in the suburban market is not a bad choice nowadays, as the infrastructure system has been improved.

Pham Ngoc Thien Thanh from CBRE Vietnam noted a lot of large-scale projects have been implemented in Long Thanh district, and 90 percent of buyers in the area are from HCM City.

However, experts warn that the speculation may lead to price fever similar to what happened in districts 9 and Binh Chanh.

DKRA Vietnam has predicted that the new supply and demand for land may recover and increase in 2021, mostly in Long An, Dong Nai, Binh Duong and Ba Ria – Vung Tau. Land continues to be the top choice for investors this year.

The real estate market of Phu Quoc in the Cuu Long (Mekong) River Delta of Kiên Giang was forecast to be robust as the island district has just been given the green light to be upgraded to the country’s first island city in March this year.

The industrial market is the only real estate sector that has enjoyed positive progress in both rental rates and occupancy rates during the COVID-19 pandemic.