“In this cemetery alone, there are 10,700 graves. Peace is more important than anything you have in the world,” said Nadav Eshcar, Israeli Ambassador to Vietnam. 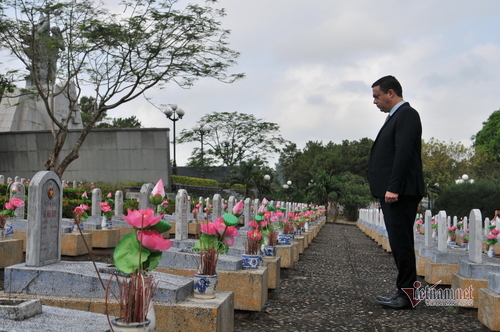 On a sunny morning in late April, Ambassador Nadav Eshcar, who was in Quang Tri province for a business trip, offered flowers and visited the martyrs and heroes at the Road 9 National Martyr Cemetery.

The land that saw the fiercest clash

Present at the cemetery for nearly one hour, along with Director of the Quang Tri provincial Department of Foreign Affairs Nguyen Trieu Thuong, the ambassador stroke the bell nine times to start the ceremony.

He and the visitors spent one minute to commemorate the heroes and martyrs, then burned incense at the graves.

“Quang Tri is really a special province of Vietnam. It was the land where the two sides clashed the most in the war. It is of a great significance for us to visit the land and make investment in its future,” he said.

When he realized that his visit coincided with the anniversary of Dong Ha City liberation day, the ambassador could not hide his emotions.

“This is a symbolic place of the war, and for heroism. When visiting the Road 9 Cemetery and learning that tens of thousands of people, including unknown soldiers, died for the liberation of their country, I felt deeply moved. They sacrificed themselves for the country, for their families, and for those they never knew.

I hope that there will not be more cemeteries like this in the future,” he said.

“It will be extremely significant if people visit this place not only to hear about Vietnam’s heroism and Vietnamese spirit, but also learn about losses. In the cemetery alone, there are more than 10,700 graves. Peace is more important than anything you have in the world. I hope this visit will send a message to Israeli, Vietnamese and other people that everyone should strive for a good future for us."

'We also have tombs of unknown soldiers'

The Israeli Ambassador said it would be significant to visit the cemetery on any day.

“When I am here, I think about Israel. We also have many tombs of unknown soldiers. I think about their parents, and their children as well. And right here, I can feel the pain of the 10,700 families,” he said.

Road 9 Martyrs' Cemetery is the resting place of more than 10,700 heroes and martyrs, including regular soldiers, local soldiers, guerrilla and militias and vanguard youth who fought and served the struggle on the Road 9 front and the neighboring country of Laos during the entire resistance war against the US.

At the Truong Son National Martyr’s Cemetery, most of the graves have soldiers’ names. Meanwhile, at the Road 9 Cemetery, 65 percent of tombs remain unknown.

Over 3,200 tombs with information about names of martyrs, their hometowns and ages have been buried in the areas reserved for each city/province. But 785 tombs still lack some information, and the others remain unknown.

There is also a collective tomb area, where about 600 martyrs are resting. It is situated on a solemn location, comprising eight large tombs.The largest tomb is a place for 123 martyrs.

The cemetery without graves

The Ancient Citadel of Quang Tri, located on the Thach Han River bank, was the site of an 81-day fierce battle.

Quang Tri town, from June 28 to September 16, 1972, was likened to a bomb hub. The 3 square kilometer area, during 81 days and nights, incurred 328,000 tons of bombs. The total number of bombs that the US used at that time had the destructive power equivalent to 7 atomic bombs dropped on Hiroshima and Nagasaki (Japan) in 1945.

Today, the ancient citadel is viewed as a cemetery without graves. It is a common grave of soldiers who died for their homeland, for peace, and for unification of the country.

Thach Han, the biggest river in Quang Tri, and the ancient citadel, are majestic reminders of the nation’s resistance for independence and freedom, imbued with blood and flowers.

During the 81-day-and-night struggle, the river served as the route used to carry food and resources to the Quang Tri Front. In an attempt to eliminate the supply route, the enemy frantically bombarded the river and many Vietnamese soldiers laid down their lives there for their motherland.

On September 16, 1972, the last day of the 81-day-and-night struggle, after receiving the command to withdraw all troops to the northern bank to preserve the forces, hundreds of soldiers and wounded soldiers after many days of immersion in water, starvation and suffering from cold, did not have enough strength to cope with the flood water. And Thach Han River became the eternal resting place for the Quang Tri ancient citadel heroes.

'We are very happy to bring prosperity to the people. We hope to maintain connection with the land and people here," said Israeli Ambassador to Vietnam Nadav Eshcar during his recent business trip to the central province of Quang Tri.

After finding unexploded bombs when he was digging the foundations of his new house last month, Ta Thanh Dat knew what he had to do.

General Nguyen Chi Vinh: public awareness about the danger of unexploded bombs needs to be improved

“People cut up bombs or carry them while driving their motorbikes to sell them as scrap metal. So, we need to teach people to be afraid of unexploded bombs,” said Senior Lieutenant General Nguyen Chi Vinh.