HCM City authorities have been considering a plan to grant ‘green’ and ‘yellow’ cards to its citizens, but the city has decided to extend social distancing after September 15.

Ho Chi Minh City has decided to extend social distancing in accordance with the Prime Minister’s Directive No.16/CT-TTg till September 30, said Chairman of the municipal People’s Committee Phan Van Mai at a press conference on September 13. 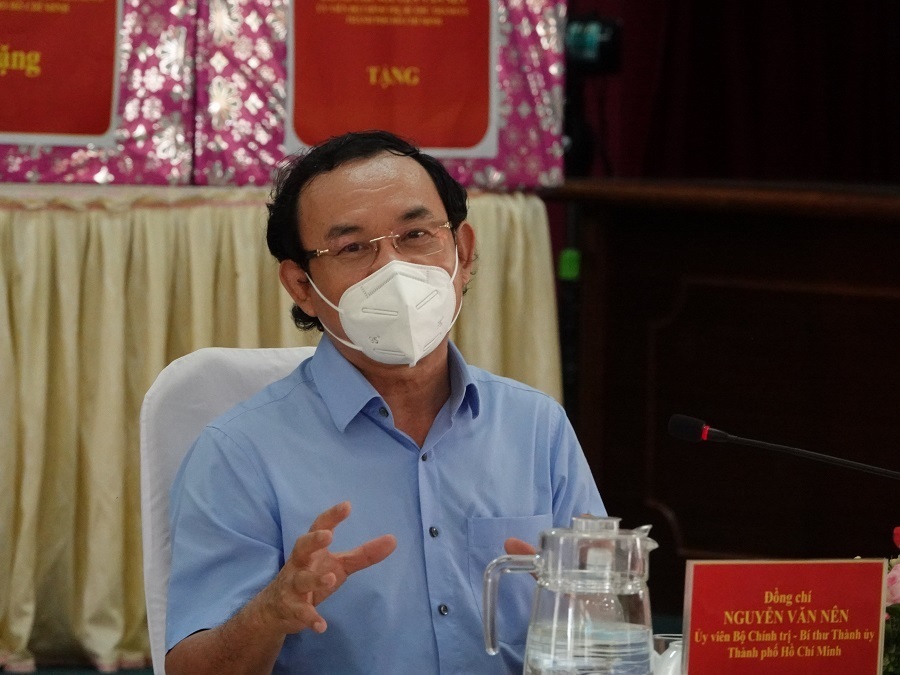 On the sidelines of a working session with Can Gio district late last week, HCM City Party Committee Nguyen Van Nen talked to the press about the forces from other cities and provinces coming to HCM City to reinforce the city’s resources to fight the pandemic.

Nen said the Ministry of Health (MOH) and the city share responsibility and views about coping with the pandemic. Officers, medical workers and physicians all are enthusiastic about joining forces to implement measures set by the Government and MOH.

He stressed that since the city began implementing the plan to fight the pandemic, medical forces allocated by MOH have come to the city, including MOH Deputy Minister Nguyen Truong Son, to discuss and implement solutions.

“The Delta variant has been spreading very rapidly, going beyond the capability of the city’s medical system. If the reinforcement forces of the MOH had not come, we would not have had the results that we see today,” Nen said.

“The Party Committee and city residents respectfully recognize the help. We are indebted to all of them for help and we have to apologize for our mistakes,” he said.

Before the working session with Can Gio district, Nen and Son, together with the working group, visited Can Gio Covid-19 Treatment Hospital.

Talking to the medical staff, Nen said the city is gathering strength to overcome the current difficult period. This is now the third week of the city's peak campaign of implementing Government Resolution 86.

The Can Gio Covid-19 Treatment Hospital has made a significant contribution to the city’s fight against the pandemic.

According to Nen, to prepare to return to the new normal, it’s necessary to consolidate the medical system from the grassroots. The municipal authorities and MOH are preparing for a long-term strategy.

“After a period of tough struggle, we have learned bloody lessons. We need to reinforce the medical system, especially at the grassroots level, so as to be proactive to deal with the pandemic once these support forces leave,” Nen said.

“The city still won’t be able to loosen the social distancing after September 15 and apply the ‘green’ and ‘yellow’ cards,” HCM City Vice Mayor Duong Anh Duc said at a seminar on controlling the pandemic on September 12 evening on the national television VTV.

Duc said that the city would have to extend social distancing in accordance with Prime Minister Directive 16 until the end of September. 16+ measures will still be maintained in some areas, while areas with lower risks, such as Can Gio and Cu Chi districts, may apply Government Directive 16- or 15+ measures.

HCM City and some southern provinces are considering issuing ‘green’ and ‘yellow’ cards, or applying a similar regime to help people belonging to ‘safe’ groups to travel and participate in production and activities.

The Ministry of Information and Communications (MIC), MOH and relevant agencies are preparing databases and IT solutions, so that the country can use one app after the data synchronization.

Duc said green and yellow cards will be automatically updated. However, not everyone can use technology, so the city is consulting with experts on other solutions.

According to Duc, one of the important criteria for citizens to get green cards is that they have had two vaccine shots and the second one for at least two weeks. Only after two weeks of getting the second shot are there enough antibodies to protect people.

To date, HCM City has given 7.8 million shots and 1.3 million people have had two shots, many of whom are older people or have underlying health conditions. These people belong to high-risk group who are recommended to restrict travel, even when they have had two shots.

Prior to that, at a working session in Can Gio district, Nen said HCM City still cannot fulfill the task of controlling the pandemic by September 15 as set by the Government’s Resolution 86.

Therefore, the city has asked for more time, possibly until the end of September, to reach that goal.

PM warns against hastiness in reopening after lockdown

Prime Minister Pham Minh Chinh on September 11 demanded that hastiness be avoided in resuming production and business activities when the battle against the COVID-19 has produced initial positive signs.