Many enterprises in HCM City are operating under a so-called production-and-quarantine model, i.e. maintaining production while strictly following quarantine rules amid the Covid-19 outbreak. 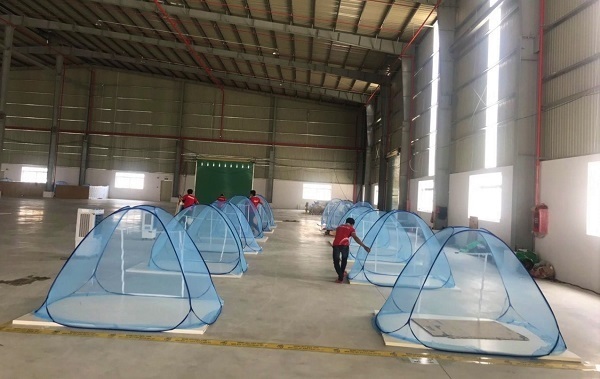 Tran Thanh Son, head of the HR Division of Song Ngoc Garment Company in Tan Binh District, worked at the office every day in June, preparing for possible scenarios if one positive Covid case was found in the company. But it was only supported by 30 percent of the workers.

Son drew up a detailed plan on what to do in such situations. “Sleeping tents for workers were bought some months ago. Standards and procedures have been set - how to sterilize the products brought from outside, what to do if the food and catering supplier has an F0 case and other possibilities,” he said.

After an agreement from the majority of workers, on June 22 the enterprise officially began running the model of production and quarantine on the site. On-site working and living facilities were arranged for 230 workers belonging to the production division.

Meanwhile, 50 employees belonging to the administration division go to work and return home on the same day, but are in a separate building and don’t have direct contact with the workers in the production division.

Workers at the company have to be tested for Covid-19 three times, and after getting negative results, they have to stay at the workplace to be separated from sources of infection.

The workers who don’t agree to work on sites are allowed to stay with family members. They have to stay at home and not affect the production chain if they become infected.

The production activities of Song Ngoc Company have been stable over the last 20 days.

The model has led to higher expenses. The enterprise not only has to pay for workers’ lunches but breakfasts and dinners as well. It also has to pay more for electricity and water.

“We have to stay here because of the pandemic. If you keep going back and forth, you may bring disease to your family members. One infection case will be enough to affect your income, your financial capability, and the enterprise may have to shut down. Stay here or go home – think about it carefully,” Son told the company’s workers before kicking off the program.

To date, about 100 enterprises in HCM City have registered the ‘production and quarantine’ model.

Dai Viet Group’s CEO Ngo Xuan Manh said his company has been successfully allowing production workers to eat and sleep on the site.

The company activated the program one week before the time HCMC imposed social distancing under Directive 16.

The enterprise has 10,000 square meters of land area, with some of it vacant. The area has been cleaned and used as the place for eating and resting. Women and older workers can stay within the workshops, while young men stay in tents.

“Everyone is given one set of bedding. Sleeping tents are placed 2-2.5 meters away from each other. All workers have to meet requirements after testing and family conditions to be able to be in the factory,” Manh said.

There are six production workshops in the company with 160 workers, and the workshops operate separately. Meals are sent to every workshop, and workers, one after another, go to pick up their meals, instead of rushing there at the same time.

“Thanks to everyone. I know staying at the factory is not as good as staying at home. But what will happen if all people stay off from work and what will the country and economy be like? So, let's join forces to obtain the dual goal – preventing the pandemic spread while maintaining production activities,” Manh wrote on his Facebook page.

Pham Ngoc Hung, Deputy Chair of the HCM City Enterprise Association, said the model could be used in specific cases and depending on the enterprise scale, it may not be easily implemented by all enterprises.

It is easier for small and medium sized enterprises with large premises, or the ones that have dormitories to accommodate their workers. It is impossible for garment or footwear companies with 20,000-30,000 workers.

According to Hung, the main goal is ensuring safety during the operation. Enterprises need to halt production if it is necessary and the risk is high.

He mentioned the case of workers running away from a factory in Binh Duong province when an F0 case was discovered, saying that enterprises need to learn a lesson from this.

“The highest goal for all is preventing and fighting the spread of the virus,” he said.

Businesses in HCM City, Long An suspend operations to prevent spread of COVID-19

Authorities in HCM City and Long An Province have suspended operations of a number of businesses so that epidemic prevention measures can be carried out.

Images of famous places in HCM City during social distancing

Photos of a quiet Saigon during the days of social distancing were captured by journalist Gian Thanh Son.