People are installing up to 10 e-wallets on their smartphones, but are only using them during sale promotion programs.

Hoang Anh Tung in Hanoi installed an e-wallet app on his smartphone as it promised to give VND100,000 for the first payment with the wallet. 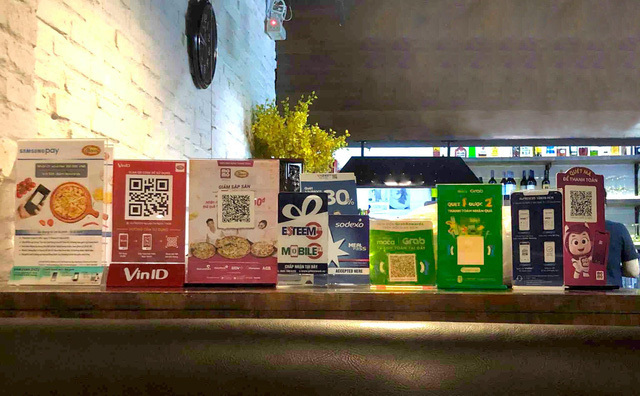 After Tung paid the electricity bill with the e-wallet and enjoyed discount of VND100,000 as promised, he shifted to use another, which also offered gifts and preferences.

Tung said he has installed nearly 10 e-wallets on his smartphone.

“Like other users, I only install e-wallets when the wallets run promotion programs. In fact, only a few wallets are used regularly,” he explained.

Users are forced to use e-wallets if they want to use the services of apps. For example, if users want to shop on e-commerce apps, they have to install e-wallets that have relations with the apps, or they won’t be able to make a payment.

Tung noted that the competition among e-wallets is fierce. This explains why there are tens of QR codes displayed at shops for customers to scan.

Mai Thu Giang, an office worker in Ba Dinh district in Hanoi, said she likes to use e-wallets because of the convenience. However, she noted that there are too many e-wallets, while each of them can be used only to make payment for certain services.

“I use Moca to order Grab e-hailing service and order food; MoMo to watch films and pay electricity bills; and Airpay to buy goods online,” she said.

A report found that there are over 30 companies providing intermediary payment services own 28 e-wallets. E-wallets are associated with promotion programs such as the 30 percent discount, 10 percent cashback, and bonus point accumulation.

The promotion programs are effective in attracting users. Analysts say for every transaction, e-wallets have ‘reasons’ to refund money or offer discounts. If consumers don’t get discounts immediately, they receive bonus points to enjoy preferences later.

In June 2020, an e-wallet ran a promotion program offering a preferential package worth VND300,000 to customers using the wallet for the first time.

Just days later, another e-wallet launched a promotion program promising anyone who attracts another user VND100,000 in his or her wallet, while the new user would receive a gift worth VND500,000.

Of course, the number of users soar after each promotion campaign. However, many of them remove the e-wallets after they use the preferences.

Asked about the benefits e-wallets can bring, most users said e-wallets are nearly the same, and are used to make payments for electricity, water, phone, internet, cable TV bills, cinema tickets and game cards.

The number of transactions is low, just several times a month, and the amount of money for payments is modest.

According to JP Morgan, 19 percent of e-commerce transaction value is carried out via e-wallets in Vietnam, which is equal to the proportion of payments in cash. Meanwhile, the figures are 34 percent for payment via cards and 22 percent for bank account transfers.

The Vietnamese e-wallet market is relatively fragmented, with no players powerful enough to dominate the market.

E-wallets have to struggle to gain every inch in the market. Each e-wallet uses its own QR Code, which makes it impossible to make cross-payments and is inconvenient for both users and payment units.

Tran Van Trong from the Vietnam E-commerce Association commented that there are too many intermediary payment service providers, and they are not synchronized, thus making it more costly and more difficult to expand the market.

BIDV Digital Banking director Nguyen Chien Thang said there should be QR Code switching systems that allow one bank or one payment unit to make payment on any QR in the market.

For the time being, the race for market share continues to be fierce as big investors continue to pour money into e-wallets.

The Vietnamese market is witnessing two e-wallet development trends. First, merger in a bigger ecosystem. Second, development of their own ecosystems.

Experts noted that the current competition among e-wallets is similar to that of e-commerce websites some years ago.

Over 225 million transactions made via e-wallets in Q1

The number of transactions via e-wallets in Vietnam in the first quarter of 2020 increased highly with a total of 225 million transactions.

The obvious effects of the COVID-19 pandemic include the rapid increase in online payment services and digital banking across Southeast Asia.