Vietnamese Deputy Prime Minister Vu Duc Dam and the World Health Organization (WHO) representative Kidong Park have both noted that Covid-19 has been quietly spreading in the community. 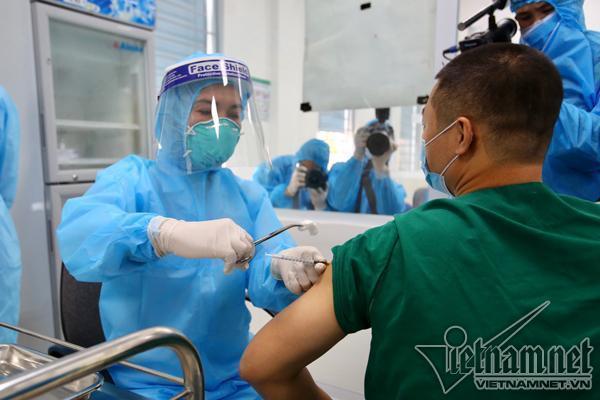 Vaccinations are the only effective weapon against the coronavirus.

Local newspapers reported that the Deputy PM said that the hotbeds have been put under control, but ‘pathogens’ exist in the community, which could break out in any locality and infect anyone. The whole system is on the alert and action must be taken immediately to create zones of epicenters to stamp out the spread when new infections are discovered.

Kidong Park noted that the coronavirus may have been quietly spreading throughout the community, since epidemiological evidence in some infections could not be found.

When the hotbed at Bach Mai Hospital was discovered, the tracing of two F0 patients failed to find their sources of infection. The same was reported for the outbreak in Da Nang.

In the case of the outbreak in Hai Duong province during Tet holidays and in Hanoi now, physicians discovered infections only after the infected people were tested positive after arriving in Japan and Laos.

As for the ongoing outbreak, the information seems to be clearer as appropriate agencies have confirmed that India, UK and other variants exist.

If there was only one India variant, one would come to a conclusion that the infection just began recently. However, since there are many other variants as well, it is reasonable to think that viruses have existed here and have quietly been spreading.

As the whole world is reeling and regional countries are faced with new outbreaks, ii may be impossible for Vietnam to stop the spread of infections, though incoming international flights are still banned except for certain groups.

The SARS-CoV-2 virus has an incubation period of 21 days (it was 14 days previously); 86 percent of people with virus did not have clear phenomena, and now the figure is 60 percent; the R0 factor (which indicates how contagious an infectious disease is) is 5, which means that one person can infect five other people; and the testing capability is weak. Some cases had negative results 2-3 times, but later tested positive.

These figures show that the community cannot be absolutely immune to the virus which has been spreading all over the world.

However, this view has raised controversy. But even if some people disagree on some issues, they still have to strictly observe the regulations to help stop the spread of coronavirus, especially the 5K principle - Khau trang (face mask), Khu khuan (disinfection), Khoang cach (distance), Khong tu tap (no gathering), and Khai bao y te (health declaration).

Many people talk about their fears, but don’t wear protective masks, travel a lot, and consider the fight against the pandemic as the ‘job of the State’, not their own.

The message from Deputy Prime Minister Vu Duc Dam and WHO representative Kidong Park might be contrary to the viewpoint of many people, who believe that Vietnam is the best in the world in fighting the pandemic, and that the coronavirus doesn’t exist in the society.

Kidong Park affirmed that WHO has confidence in the measures to fight Covid-19 being taken by the Government of Vietnam. The country has intensified the measures which proved effective in previous outbreaks.

Lockdowns have been limited, which have prevented an economic collapse. However, problems still exist. The cooperation among local authorities in the previous outbreaks was not smooth. In some localities, social distancing was too widespread, which caused business stagnation and affected people’s livelihoods.

As a result, Instruction No 82 was necessary. Vietnam needs to strengthen testing capacity and urgently negotiate to buy vaccines if it wants to open its doors to the world.

Bac Giang is currently an epicenter, but the testing capacity is limited, only 1,500 cases a day, which is small compared with the population of 1.8 million.

HCM City has recently bought 200,000 more PCR test kits and 100,000 quick test kits, but the figures are still small compared with its population of 13 million.

The testing capacity needs to be improved urgently to better fight the pandemic.

The vaccination rate in Vietnam is now one of the lowest levels in the world and the number of vaccines imported so far is just a ‘drop in the bucket’ compared with the total population of nearly 100 million.

The Ministry of Health (MOH) is negotiating to buy vaccines, but this is a long and tough process. It is necessary to accelerate the vaccine purchase by allowing more enterprises to import the permitted vaccines.

Vietnam has overcome a long and uncertain path, and the path ahead is still risky. Vaccinations, as seen in the US, UK, Israel and other countries with high vaccination rates, are the only effective weapon against the coronavirus.

Vietnam to get 31 million Pfizer vaccine doses in Q3, Q4

Vietnam is expected to get 31 million COVID-19 vaccine doses developed by US-based firm Pfizer in the third and fourth quarters of 2021, said the Ministry of Health (MoH).

Vietnam’s Prime Minister said purchasing vaccine is an urgent task and must be done at the earliest.