With control loosening, businesses in green zones in Hanoi will be able to restart their production and business activities. But they fear that control may tighten again if the outbreak gets worse. 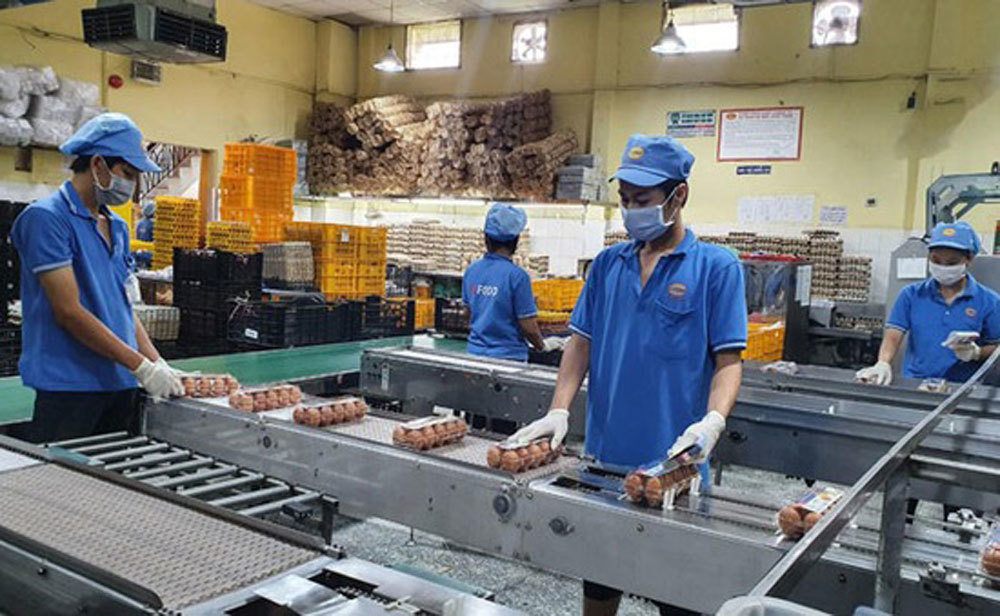 Pham Duc Anh, Director of Hong Minh Production and Services, has a cosmetics production facility in Hoai Duc district. When Hanoi imposed lockdown on July 24, the company had to stop its operation because cosmetics are not considered essential goods.

In order to resume production, the enterprise was told to draw up a plan on both organizing production and fighting the pandemic for approval.

Anh is happy but he still has worries. Many workers at the company live in Ha Dong District, which belongs to a red zone. How will they move from their houses in the red zone to the factory in the green zone? And he wonders if travel permits will allow people to go from red zone to green zone to work.

If the enterprise organizes production with the ‘three on the site’ model, it will run with just 30 percent of capacity.

The enterprise is facing a lot of other problems, including a 50 percent disruption in the supply chain because of social distancing. In addition, cash flow has stopped because the company has no revenue but still has to pay for rent, loan interest and prevention measures.

Anh thinks that production will only be able to return to normal by the end of the year, if the outbreak is controlled in September.

Nguyen Van Cuong, Director of Tre Viet in Thanh Oai district, which makes interior products from bamboo for export, said his enterprise has been pursuing the ‘three on the site’. He has reduced the workforce, which has resulted in lower productivity, while anti-pandemic costs have increased.

Since Thanh Oai district belongs to a green zone, the company has upgraded' facilities and increased the workforce to resume operation. What worries Cuong the most is the delivery time. If the company cannot deliver products on schedule, it will be fined.

A representative of URC Hanoi which has a food and drink production facility in Thach That – Quoc Oai industrial zone (IZ), said the enterprise has been organizing production with ‘three on the site’ model since late July and it will maintain it as per the request of the local authorities and the IZ board of management.

Most of the workers are locals from Thach That and Quoc Oai districts, so there is no need to worry about their travel. However, the production mode has led to higher anti-pandemic cost. Meanwhile, the input and transportation costs are also on the rise.

Many enterprises in green zones have said they will resume production and business. However, they fear that local authorities may set up new anti-pandemic regulations which may affect their activities.

Chuong My District has asked enterprises to run at 50 percent of capacity and workforce, and schedule production shifts in a way to ensure necessary distance among workers. Enterprises have also been asked to commit to measures to prevent the pandemic and take responsibility if Covid-19 breaks out in their factories.

Thach That has decided to divide the district into three zones, including high-risk (orange), medium risk (yellow) and safe (green). The district continues to suspend the operation of service facilities in the locality, except ones providing essential goods and services.

The Gia Lam People’s Committee has also divided the locality into three sub-zones depending on the risk level. The construction of private houses is allowed, but must follow the ‘three on the site’, and ‘one route, two location points’ models, and the owners must have approved plans to prevent and control the pandemic.

The eateries in green zones can reopen, but only can sell take-away food.

According to the Hanoi Labor Federation, many enterprises have suspended production or kept operation at a moderate level during the fourth outbreak, which has affected hundreds of thousand of workers. Hanoi had over 1,000 large-scale production enterprises affected in the peak time, and nearly 50,000 lost jobs or lacked jobs and had to work in a rotation scheme.

However, the city has established 615 ‘business green zones’ which have operation plans approved by the local authorities.

The model of free Covid units will be applied to the enterprises to restart their operation and help expand business green zones.

Hanoi has potential risk of COVID-19 infection clusters in community

The capital of Hanoi is at high risk of recording an increase in the number COVID-19 cases within the community as it has many densely populated alleys and streets, as well as crowded residential areas, according to experts.