The government’s 2011-2020 master program on the state administration reform has come to an end.

State agencies will review the implementation of the program and determine what to do in the next period. The achievements and existing problems will be found and analyzed. 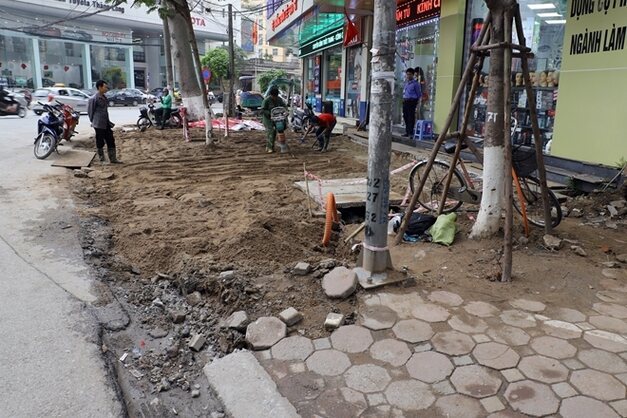 Bricks on street pavements are replaced once every several years

More than 10 years ago, most of the EU’s governments engaged to carry out strong administrative reform to bring benefits to enterprises. Hearing that, businesses then asked the governments to show the benefits the reform can bring to them, and the value of the benefits.

EU countries then had to calculate the administrative procedure compliance costs that businesses have to pay, which allowed them to estimate the amount of money they would save if carrying out the reform.

As such, the results of administration reform needed to be quantified, i.e. it was necessary to calculate the benefits for people and businesses.

It is now simpler to have college degree, household residential registration and certificate of birth certified at the local authorities. People don’t have to travel too far and don’t have to show too many kinds of documents thanks to the one-stop shop mechanism.

In many cases, people and businesses do not need to come directly to agencies because they can use third- and fourth-level online public services.

The civil servants who receive people have changed their behavior and attitude. The government’s openness and friendliness towards businesses have been established.

Many government leaders have become aware that it is businesses which act as the driving force for the country’s socio-economic development. Most of the decisions by the Government have been applauded by the business circle.

If asked what the biggest problem is, most people would say it is the workforce.

After 10 years of reform, the qualifications and capability of officers, civil servants and public employees still cannot meet the requirements.

One of the biggest achievements of reform was that many embezzlement and wrongdoing cases have been brought into light in the last 3-4 years. Never before has Vietnam witnessed such a high number of officials, including high-ranking ones such as ministers and Deputy Prime Minister, being disciplined.

However, this is not enough, or in other words, there has been no drastic changes in the contingent of civil servants. Many public employees are not capable, but still stay, while the number of retrograde and degenerate elements is still increasing. This is clear evidence for the poor results of workforce reform.

The institutions to manage the workforce are still not good enough. Policies have been deployed in moderation. This weakness, plus interest groups and embezzlement cases, created good soil that incubates toxic plants which cannot be eliminated at once.

Every action, big or small, by the authorities, central and local, needs to be clarified for whose benefits they are taken.

Gentrification is part of every urban development plan. However, it’s a big problem in Hanoi that bricks on street pavements are replaced once every several years and the pavements are then tiled once again. This demonstrates the management capability of local authorities.

Press agencies have recently reported that the Ministry of Construction’s inspectors flew to HCM City to inspect apartment and villa projects which have overly high construction density. On a section of Nguyen Van Canh Road alone, three kilometers long, there is one construction project every 500 meters.

In fact, the same problem can be seen in many areas, including Le Van Luong, To Huu and Nguyen Tuan streets in Hanoi.

The problem lies in the management mechanism. One ministry is in charge of licensing construction works, while matters related to the transport network, and school and hospital planning are under the management of other ministries.

If traffic jams occur, this must be settled by transport agencies, while risks for fires and explosions must be the concern of fire prevention and fighting agencies.

One man said that he usually goes to a hospital under the Ministry of Public Security for medical services and always has to show a lot of documents. The procedure is repeated every time he comes. But if he goes to 108 Military Hospital, he only has to show documents the first time and not the next time because his personal information is stored in the hospital’s system.

Over 1,000 administrative procedures, 3,893 out of 6,191 business conditions and 6,776 out of 9,926 categories of goods subject to specialized inspection have been simplified or removed in four years.