Vietnam’s captain Que Ngoc Hai has apologised over an advert he posted on social media that allegedly violated the copyright of the national football team. 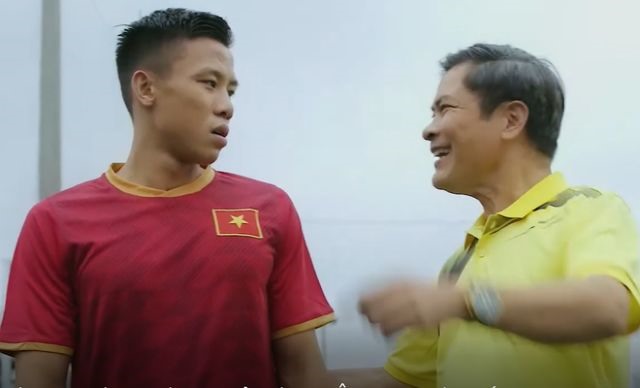 Que Ngoc Hai in the promotional video with a shirt resembling the jersey of the Vietnam national football team. — Photo cut from the video

The video features clips of Vietnam playing in the 2022 World Cup qualifiers when Hai passed the ball to Nguyen Quang Hai to score the winning goal against Malaysia at My Dinh Stadium.

The video also features players in red shirts emblazoned with red flags and yellow stars, similar to the national flag.

To use the footage, the game brand needed permission from the Vietnam Football Federation (VFF) and the Asian Football Confederation (AFC), the two organisations that hold the copyright of the Vietnam national team’s images and matches.

The video was later removed from his Facebook page and the defender posted a lengthy apology.

“In the past few days, there have been some stories not related to my profession that has also affected the image of the national team, and I feel really sorry for everything that happened, it shouldn’t have happened in the first place,” he wrote.

He went on to apologise to the VFF and his club Viettel, as well as his fans, before saying he has limited commercial experience and the incident was a big lesson for him.

Hai said he has been working with the VFF and Viettel to resolve the incident but noted that the video producers were fully responsible for the content of the advert.

“Those responsible have not contacted the VFF to use this footage,” VFF Deputy Secretary-General Nguyen Minh Chau told vtc.vn.

“They have to pay attention to legal factors, the VFF must also carefully check the footage used in the video.

“In legal terms, this game advertisement cannot use images in the matches of the Vietnam national team, as these images belong to the AFC.

“If the press uses AFC's images to report on the match or tournament, it is normal. But if other units use these images for commercial purposes, they are using unauthorised images.

“The AFC may not be aware. But as members of the VFF, we must report this to the organiser,” he said.

According to Chau, the shirts in the video were deliberately used to indicate to viewers that the Vietnam national team was being depicted.

“Although the player's outfit in the advertisement is different in colour tone and there is no sponsor logo, with only the red flag with a yellow star on the shirt, viewers can still understand this is the national team.

“This is still piracy and VFF will never accept that." — VNS