The world’s football governing body FIFA has approved the expansion of the women's World Cup from the existing 24 teams to 32, starting from the 2023 tournament.

This will be an opportunity for Vietnamese football to attend the biggest festival of the world women's football for the first time ever. 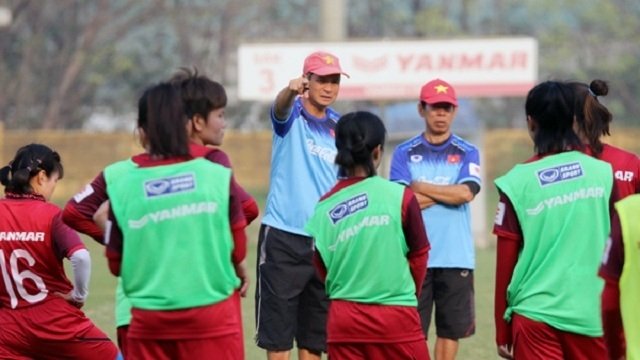 Coach Mai Duc Chung and his players are looking favourable to win their first ticket to the biggest women's football festival on the planet. (Photo: Vietnam Football Federation)

On July 31, FIFA announced that the FIFA Council has unanimously agreed to a proposal to expand the number of teams joining the FIFA Women’s World Cup from 24 to 32, with effect as of the next World Cup in 2023.

Thus, after increasing the number of participating teams from 12 in the first tournament in 1991 to 24 teams in the last two World Cups, the biggest women's football festival on the planet will be officially on par with the men's tournament in the following four years with a total of 32 teams participating.

In addition, FIFA also officially announced the latest requirements and timeline of the bidding process for 2023. Until now, nine member football associations have submitted their bids, including Argentina, Australia, Bolivia, Brazil, Colombia, Japan, New Zealand, South Africa and the Republic of Korea. The deadline for countries to apply for submitting bid documents to host the next World Cup was in December 2019, before FIFA plans to publish a bid evaluation report in April next year and then one month later the host country for Women's World Cup 2023 will officially be announced.

According to FIFA President Gianni Infantino, the “astounding success” of this year’s FIFA Women’s World Cup in France made it clear that this is the time to keep the momentum going and take concrete steps to foster the growth of women’s football.

“The expansion reaches far beyond the eight additional participating teams; it means that, from now on, dozens more member associations will organise their women’s football programme knowing they have a realistic chance of qualifying,” Infantino said according to the FIFA’s announcement on Wednesday.

According to the latest FIFA rankings, the Vietnamese women's team ranked sixth in Asia and 35th in the world, thereby having a great chance to attend the 2023 World Cup when the tournament is to be expanded to 32 teams. (Photo: FIFA)

Vietnamese women's football is also in this process of progressing. Ranking sixth place within Asia and 35th in the world on the latest FIFA rankings, Vietnam are full of confidence for their first tickets to the finals of a FIFA Women's World Cup, when the tournament is being expanded to 32 teams in 2023.

In the 2019 World Cup, Asia had five teams in the finals, including China, Japan, Thailand, Australia and the Republic of Korea. Thailand are also the only Southeast Asian team that have ever attended the Women's World Cup twice, starting from the 2015 edition. Under the announcement of next tournament holding 32 countries, the Asian Football Federation (AFC) will have at least one extra slot to the next World Cup in 2023.

Earlier, in the 2019 Women's World Cup Asian qualifiers, the Vietnamese women team reached the final qualifying round but were unable to progress after standing at the bottom of Group B. Coach Mai Duc Chung’s players lost all three of their matches against strong opponents Australia, Japan and the Republic of Korea.

Vietnamese women football have also come very close to the ticket to the World Cup, with the most regrettable chance was the 2-1 defeat to the arch Thai rivals in the play-off for the World Cup 2015.

At that time, the Vietnamese team, led by coach Tran Van Phat, played at home but missed the "golden" opportunity to make history for Vietnamese football. Vietnam have only reached the World Cup at youth level, thanks to the national U20 squad in 2017.

According to the current allocation of FIFA World Cup confederation slots, with a 24-team structure, AFC has five tickets to the finals. When the tournament increases to 32 teams, AFC will likely have at least six to seven tickets.

Therefore, being in the top teams of the continent women's football, (currently Vietnam rank 6th in Asia). A ticket to the 2023 Women's World Cup finals is completely within the reach of the Vietnamese girls, if they have thoroughly preparation and receive strong investment from the Vietnam Football Federation from now on.

Currently, the Vietnamese women's team under the guidance of coach Mai Duc Chung are in an advanced training stage in Japan to prepare for the upcoming ASEAN Football Federation Women's Championship 2019.

During the 12 days of training in Fukushima, the Vietnamese girls will have three friendlies with local quality teams, aimed at improving their skills as well as tactical thinking before returning to Vietnam to complete the final preparation steps for the regional tournament, scheduled to take place in Chonburi, Thailand from August 15 to 27.