The celebrated pen of Nguyen Du

It’s customary for Vietnamese people to commemorate the ancestors, related or not, on the anniversary of their death. Not to mourn their passing, but to celebrate their life.

This year marks the 200th anniversary of the death of Nguyen Du, Vietnam’s most beloved poet. 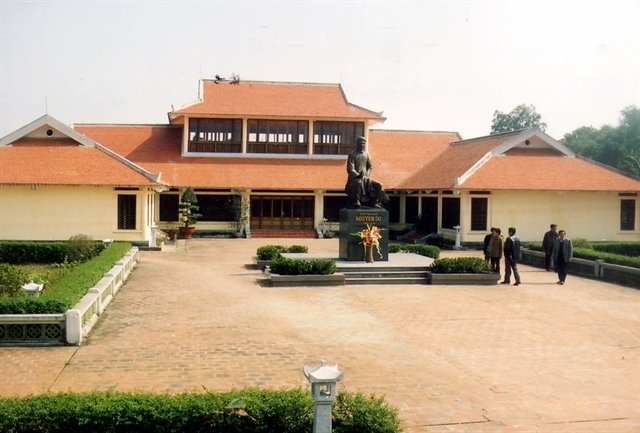 The Nguyen Du Memorial Compound welcomes poetry afficionados from around the country.

The Nguyen Clan of Tien Dien in the central province of Ha Tinh together with the Vietnam Kieu Scholars Society held a solemn ceremony recently to honour the poet, who has lived in the hearts and souls of generations of Vietnamese over the course of two centuries.

When Nguyen Du died in the autumn of 1820, writer Tien Phong Mong Lien Duong wrote a preface for the poet’s famed Truyen Kieu (The Tale of Kieu). “To Nhu [an alias of Nguyen Du] has explored the human psyche, has a personal narrative, has beautifully described nature, and is well-conversed in affairs of the heart. If he hadn’t had a far-reaching vision of the six realms of rebirth and existence: gods, demi-gods, humans, animals, hungry ghosts, and hells, nor had a heart that aches for a thousand lifetimes, he would not have had such immense power in his pen.”

In 1924, the Tien Duc Society, or the Association for the Intellectual and Moral Formation of Annamese, held a grand ceremony commemorating Nguyen Du and his legacy.

Tran Trong Kim, deputy head of the literary section of the society, made a speech about the poet’s life. Pham Quynh, then a minister of the Royal Nguyen Court, presented a bilingual address in Vietnamese and French, while a singing speech was given by Confucian scholar Nguyen Don Phuc and an essay submitted by Bui Ky, encrypted on a stela.

It was at this ceremony that Phạm Quỳnh made his famous remark: “As long as The Tale of Kieu exists, our [Vietnamese] language exists. And our language remains, our country remains.”
In 1965, 20 years after Vietnam became a republic and with the last emperor now a normal citizen, a memorial commemorating Nguyen Du’s birthday was held at the Hanoi Opera House in the presence of the World Peace Council.

During the next 50 years, the beautiful verses of The Tale of Kieu were cited many times, in reconciliation speeches by US Presidents Bill Clinton and Barack Obama as the former foes tried to build new partnerships.

But The Tale of Kieu was not meant to heal diplomatic relationships. It recalled an ill-fated love affair and the destitution of a beautiful young woman forced to put her family’s honour ahead of her own love. Nguyen Du unveiled the dark side of women’s lives, men’s ostensibly grand gestures, and horrific revenge in the name of legal love.

In his latest paper to commemorate the 200th anniversary of Nguyen Du’s passing, scholar Tran Nho Thin from the Hà Nội National University said that, a learned man, Nguyen Du lived in a time when the political power of the ruling Le Court was transgressed by the rising Trinh Lords.
“During the five years from 1782 to 1789, the country was divided into five parts, with rising groups trying to win influence in society. In the north, the conflicts between the Le King and Trinh Lord grew very intense, which led to the destruction of the Lords, but later the Le Dynasty was also corrupted.”

“This was a time of martial power for heroes and the rise of martial art group leaders. Sadly, it was also a time when men of letters and scholars were looked down upon by more muscular leaders.”

“This led to a complex of ‘being born in the wrong time’, a state of mind held by a generation of learned men, of which Nguyen Du was the most famous, and lasting for nearly a century.”
Poetic legacy

Nguyen Du is most known for The Tale of Kieu but his career as a poet extends far further than the 3,254 verses of his epic poem.

He wrote in classic Han script, which was an academic trait of learned men of the time. His three volumes of poetry written in Han include Thanh Hien Poetry Collection (1786- 1804), Assorted Poems in the South (1805-1812), and Poems Written on Travels to the North (1813-1814).
Born into the family of a high-ranking court mandarin, his stature at a time of great change in Vietnam and personal loss made him the poet of the less fortunate, the disadvantaged, and the weaker in society.

Nguyen Du lost both parents at the tender age of 13, and lived with his older brother. Having lived through the decaying years of the Later Lê dynasty, he gave himself 10 years to think it over before deciding to serve the subsequent Nguyen Dynasty.

He also wrote poems in Nom, ideographic Vietnamese script based on Han Chinese characters. Nôm script was an attempt to break away from the strict discipline and jargon of the classic Han literary traditions.

The Tale of Kieu was written in Nôm script, but was known by heart by many people, even rural illiterates.

Another masterpiece from Nguyen Du is Call to Wandering Souls, a requiem that shed tears and expressed pity for all those who died accidentally, had no one to worship them, and turned into wandering souls.

A perennially melancholic poet, Nguyen Du served the Royal Court but also saw and felt the misery of the ordinary people. His epic poem about Kieu and other works were human tragedies, but he also strived for a more humane and poetic approach to the human condition.
Inspired by Kieu

Though the original storyline of Kieu was adapted from an old Chinese narrative, Nguyen Du’s talent lay in telling the tale in the most beautiful and poetic way, containing vivid emotions never before found in traditional Vietnamese poetry.

The tale also transcends Nguyen Du’s own philosophy that goodwill or kindness will overcome talent as reflected in the last few lines of the tale:

With Heaven rest all things - so life has taught us.

Heaven allots to every human a condition.

Doomed to a wanderer’s lot, you’re to wander.

And an elevated position will be yours if it’s destined for you.

Heaven is in no way partial,

But liberally gracing both talent and fate!

Don’t take too much pride in your gift:

gift sometimes does rhythm with guilt

Our karma, let’s carry it as due

and stop complaining of Heaven’s finickiness.

Deep within us, there lies the root of good,the heart by far outweighs any talents.

Maybe those rustic lines, gleaned one by one

while away a few hours of your long night.

A night of poetry and music was held at Hanoi's Goethe Institute yesterday evening in front of a limited audience to ensure social distancing.