A variation of stilt-houses unique to the Central Highlands, a Rong house is a spacious gathering point in each village.

As villagers contribute to its construction and upkeep, significant value is attached to the dwelling, with it representing local craftsmanship created through joint effort. Even when it becomes worn by time, it’s still used for gatherings and fostering a community spirit. 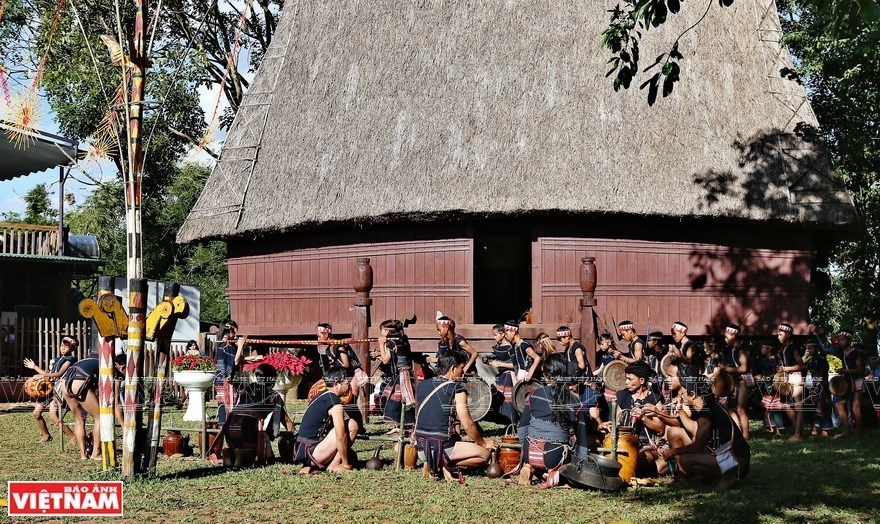 The Rong house in Plei Hle Ktu Village in Kong Chro Town, Kong Chro District, in Gia Lai Province, is some 30 metres long and made from wood and two types of bamboo. The pillars and floorboards have turned a glossy black from frequent touch and footsteps. Around and inside the house, wooden sculptures of eagles, turtles, geckos, and humans indicate its vintage.

“It was built when I was just a young man,” he said. “I helped with the construction, the sculptures, and the thatched roof. We replaced the thatch with sheet metal just recently, as you can’t find thatch nowadays. But the house still functions as before, hosting worshipping rituals and other village activities. Young people sometimes visit to warm themselves near the fireplace and sleep over.”

Whenever the village makes ceremonial offerings, the Rong house becomes a vibrant and animated place, with the elderly splitting and polishing bamboo to make a New Year pole or a worshipping table. Young people take charge of simpler tasks, like wiping dust off the gongs and practising playing. Such a collaborative effort brings the different generations in the village together and maintains the close-knit community.

Despite the ever-changing modern world, traditional rituals and ceremonies have been preserved by the local Brang villagers at the Rong house.

“When the Rong house was built all those decades ago, each household was assigned a ‘quota’ for completing a certain amount of bamboo partitioning and thatch for the roof,” said Dinh Blot, a Brang native. “It took almost five years to complete. Local people voluntarily work together in preparing for a worshipping ceremony.”

Residents of Tnung Village in Ya Ma Ward, Kong Chro District, have received a new Rong house, built with government funding, but all activities are still held at the old Rong house, as it was witness to all of the ups and downs the village has experienced over the last decades.

Another village elder, Khep, spoke of how much the old Rong house is loved by the villagers. Everyone devoted their attention to building the house. People stopped working in the fields for months at a time so they could cut down trees for the building materials. As construction is done purely from memory and the imagination of the villagers, it’s next to impossible to find a blueprint for any of the many communal houses scattered around the Central Highlands.

While the houses are still used for their intended purpose, modernisation has changed the way they are built. There are approximately 500 ethnic communal houses around Vietnam, but almost a quarter have seen traditional wooden materials replaced with cement concrete and metal. Most have retained the wooden floorboards and walls, but replaced the deteriorating thatched roof with a metal roof.

Natural materials have also become increasingly scarce and some places have to be creative when building a new communal house. The greatest challenge is the pillars. Each house requires at least eight pillars, which must withstand humidity, moisture, and termites. The most resilient type of hard wood for pillars is no longer found in sufficient quantities. Old-growth forests are where the best thatch can be found, but certain regions now lack forests of sufficient size ready for the harvesting of the weed needed to make thatch, with corrugated sheet metal now used instead.

In days not too long gone, unmarried men would often sleep at the communal Rong house and hear stories from elders about life. It was an enjoyable occasion to sleep in the spacious house, as their own homes were often quite small. These days, though, people’s homes are much bigger and young men don’t have such a need to escape every now and then. The primary use a Rong house serves these days is for community events.

Almost all Bahnar villages in Kong Chro District have a Rong house, and some have two or even three. Most are traditional in style, made from wood and maintained by the villagers.

“As times passes, of course, a Rong house inevitably needs some repairs,” village elder Drem said. “Every time we see a spot that needs mending, the elders ask villagers to contribute time and resources to fix it. This is how a Rong house is preserved for so long. Unfortunately, once the thatch deteriorates, the roof is replaced with corrugated metal.”

This is, indeed, how Rong houses in the Kong Chro area are protected. Such concerted, joint efforts at conservation are well worth it, as modern Rong houses built from bricks are rigid and lifeless and thoroughly unappealing.

The old fireplaces found in every traditional communal house are also used less and less these days, as young people no longer consider it to be a place to rest at night, like previous generations did, so the fireplaces have fallen into disrepair and fixing them just isn’t worth the effort.

A well-built Rong house can last for as long as a century if it’s maintained properly over the decades. A lot of traditions, however, are dying out, as the older generation, who not only know how to make repairs but are keen to do so, pass away, and the village’s young aren’t fans of the work required to keep the house in good order.

As many traditional values disappear, officials in Kong Chro District have expressed concern.

“Our ward encourages local people to continue organising festivals and ceremonies at the Rong house,” said Vu Cao Cuong, vice chairman of the People’s Committee of Ya Ma Ward in Kong Chro District.

“Along with that comes the promotion and preservation of traditional cultural values, like gong playing, bamboo and rattan weaving, and wooden sculpture carving. We also help residents repair and maintain their communal houses, to preserve this unequalled type of architecture for future generations.”

Despite a lack of natural resources and the impact of the modern world, conservation efforts by different generations, supported by local government, will be enough to protect these precious houses.

The traditional craft of Zeng (brocade) weaving has long been the pride of the Ta Oi ethnic group in A Luoi district, Thua Thien–Hue province.

icon
A tale told all over the world
icon0