The Hue Museum of Royal Antiquities is featuring more than 40 artefacts dating to the time of King Minh Mang at Ngu Phung Pavilion to mark the 200th anniversary of his reign in the former Imperial Citadel of Hue, a UNESCO heritage site. 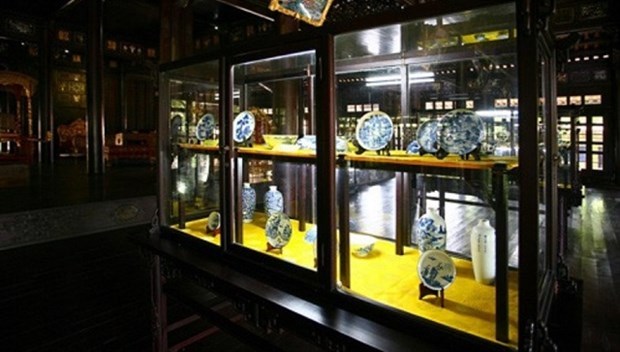 The Hue Museum of Royal Antiquities is featuring more than 40 artefacts dating to the time of Emperor Minh Mang (reigning 1820-1839). (Photo: VNA)

At the exhibition, visitors can view the seal of Quoc Su Quan, an agency that researched and compiled Nguyen dynasty history books, established at the start of Minh Mang’s reign. In 125 years (1820-1945), this agency compiled many valuable documents.

Visitors can also view other ancient urns made of porcelain and bronze.

The exhibition attracts many academics and antiquity researchers. Most of these antiques will be permanently displayed at Ngu Phung Pavilion.

This is the first time Ngu Phung Pavilion, built in 1833, has hosted antiquities from the Minh Mang era.

Minh Mang inherited the throne in 1820 after the death of Gia Long, the first emperor of the dynasty.

He is considered a dynamic and assertive king, introducing a series of reforms from politics to diplomacy, including the prevention of Western influence on Vietnam.

A new museum showcasing items and documents about the Ho Chi Minh Campaign in April 1975 has opened in HCM City.