As an outstanding graduate at the University of Industrial Arts, Ngo Duy Cuong stayed on at the university and become a lecturer of not only young students but also of craftsmen in the traditional ceramic village of Bat Trang.

It was then he discovered that ceramics have a magical seduction, even broken pieces. 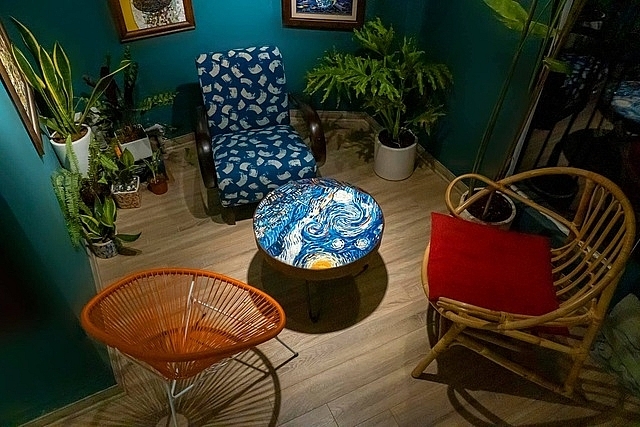 A tea table featuring a mosaic based on ‘Starry Night’ by Van Gogh. Photo courtesy of Mori Arts & Crafts

“Though I had made ceramics as a student, I never really paid attention to learning more about them,” said the artist, who is the founder of Mori Arts & Crafts.

“The more I work with the material, however, the more I succumb to its irresistible allure,” he said.

“Craftsmen normally just cast aside broken vases, pots, bowls, and plates. It always saddened me that such colourful pieces had now become useless. The idea of turning these ‘useless’ pieces into something then began to take shape.”

With what he had learned about architectural ornamentation at university, Cuong began to create mosaics from the shards.

After nearly a year of tinkering, in 2018 he debuted his first 'recycled' creations, which his friends thought were pretty good.

“They even wanted to buy them, though some had to wait because I didn’t have enough for everyone,” said Cuong, who is now a graphics lecturer at FPT University.

This was when Mori Arts & Crafts was born. Finding tools suitable for his new art proved quite a task, as using old pieces of ceramics to make new items was still a new concept in Vietnam.

He spent months wandering around the open-air flea market and surfing the internet before finding a much-needed tile nipper.

From small-sized works early on, the artist began to create larger pieces and even tea tables.

“I look at the thickness of the ceramic pieces before deciding which are suitable for art works or for tables,” he said.

To create a ceramic mosaic, Cuong draws a sketch on the surface, which is generally wood, then applies thousands of broken pieces using a special glue.

The most challenging step is arranging the pieces to bring the original idea to life. Cutting, meanwhile, is the most time-consuming step.

“I like smaller pieces because they give the work a ‘softness’,” Cuong said. “The ‘softness’ is also enhanced by chips, which are never filled.”

As the number of orders he received began to rise almost daily, he recruited some young artists to lend a helping hand.

“Alongside an instinct for aesthetics, creating our products also requires patience and ingenuity by the craftsmen,” he explained.

The artist must constantly address a small but pressing issue: a lack of broken ceramic pieces -- his raw materials -- coming from Bát Tràng and Phù Lãng pottery villages.

“I decided to ask craftsmen in Bat Trang to make ceramic pieces specifically for my work,” he said. “As they are artisanal, the colour is never exactly the same every time. I’ve had to diversify my colour palette.”

Thanks to this 'innovation', his workshop has created more sophisticated designs, such as an item based on Starry Night by Van Gogh as well as customised portraits.

The artist has also created his own designs, primarily different types of flowers or animals, because “customers tend to choose these, as they are in harmony with interior décor.”

Depending on the size and complexity of the design, each mosaic costs from VNĐ5 million (US$210) to 20 million ($860). But Cuong said this is only enough to cover costs.

His workshop completes 15 or so mosaics each month, including art works, tea tables, and mirror frames.

“Customers have increased in number while we are still just a small workshop, so they must wait two or three weeks before we fill their order,” he said.

He has even transformed his small apartment in Hanoi’s Dong Da District into a mini-gallery where he showcases his crafts.

Cuong also intends to use a wide range of other materials, such as plastic, stone and coloured glass.

An exhibition entitled “Vietnam - A Call of the Soul” is set to open in Hanoi on August 15 to honour renowned painter Tuman Zhumabaev, a friend of Vietnam who passed away on August 7. ​