Coach Park: All teams at same strength level at AFC U23 Championship 2020

Coach Park Hang-seo has assessed that all 16 teams at the 2020 AFC U23 Championship are at the same level as they are all strong teams. 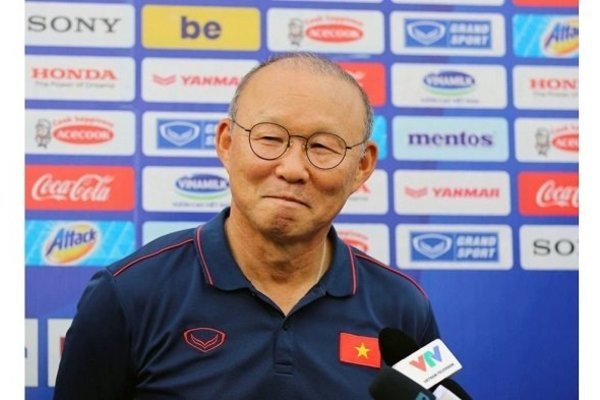 Coach Park Hang-seo during a press interview before the afternoon training session of the national senior and U22 teams on September 26, 2019. (Photo: Vietnam Football Federation)
The teams were bracketed in four groups with Vietnam, the reigning runners-up, in Group D together with the DPR Korea, Jordan and UAE.

Making his comment following the draw for the Thailand 2020 Finals on September 26, Park said that all the remaining teams are strong with the same capacity.

“We are in the same group with the DPR Korea, Jordan and UAE. In last year’s tournament in China, we were in Pot 4 for seeding, but for the next year’s competition, Vietnam are in the top seeding group. In my opinion, except for Thailand who automatically qualify as the hosts, the remaining 15 teams are the similar regarding their tactics and capacity,” the Korean tactician said, as quoted on the Vietnam Football Federation’s website.

Maintaining his assessment of Vietnam’s rivals in Group D, Park stated that they are strong, having passed the qualification to make their presence in the finals.

At the 2018 AFC U23 Championship, Vietnam were also in Group D and then created a miracle run to become the eventual runners-up. The draw for this year’s tournament once again placed Vietnam in Group D, but Park said he doesn’t take it as a lucky sign.

“I don't believe in any such good luck sign. We must to work hard for good luck to come. The finals will take place in January. Before that we must focus on two other upcoming tournaments, the 2022 FIFA World Cup qualification and the 2019 Southeast Asian (SEA) Games.”

Vietnam will bring the core of the U22 team to the next year’s tournament and many of them have slots in both the senior team for the World Cup qualification and the squad preparing for the SEA Games in the Philippines later this year.

In the qualification for Thailand’s tournament last March, Vietnam proved their strength as the reigning runners-up as they won all three matches in Group K, against Thailand, Indonesia and Brunei, scoring 11 unanswered goals to seal their final berth as the group’s winners.

But Park said the absolute winning streak in the qualification was yesterday’s story. “The qualifying round is very different from the finals as the teams participating in the qualifiers cannot be equal to those in the finals.”

Admitting that last year’s runners-up title was a pressure for him and his players, the 60-year-old said: “Every tournament has pressure. The team are gathering for the SEA Games and they will be the main force in the AFC U23 Championship 2020. If the U22 players are without any injuries after the SEA Games, they will continue to be given the opportunity. In addition, we will also have additional faces to complete the squad before entering the 2020 AFC U23 Championship campaign,” Park told reporters.

According to the seeding system, Vietnam will open their Thailand’s campaign with their opening match against UAE at Chang Arena in Buriram on January 10 next year, followed by the next two matches against Jordan, at Chang Arena on January 13, and DPR Korea, at Rajamangala Stadium in Bangkok on January 16. Nhan Dan

Vietnam in Group D of 2020 AFC U23 Championship’s finals

Vietnam’s U23 football team will be in Group D of the 2020 AFC U23 Championship’ finals, together with the United Arab Emirates, Jordan and the Democratic People’s Republic of Korea, following a draw held in Thailand yesterday.