The proposal will be submitted to the AFF Council for approval.

According to Permanent Vice President of the Vietnam Football Federation (VFF) Tran Quoc Tuan, who represented Vietnam at the meeting, the committee members agreed that the AFF Suzuki Cup is an important event of regional football, attracting interest from large crowds of fans in Southeast Asian countries.

Therefore, it is the responsibility of the AFF to ensure all aspects of the tournament are organised successfully to help fans fully enjoy its matches.

Depending on the schedule of international tournaments set to take place in 2021, the AFF Emergency Committee gave analyses and assessments on the most suitable time for the organisation of the 2020 AFF Suzuki Cup. This is a not simple problem, as there are many major football events next year, including the FIFA and AFC tournaments, the Tokyo Olympic Games and the Euros, among others. Particularly for Southeast Asian nations, 2021 is also the year in which the region’s largest sporting event, the 31st SEA Games, is set to be hosted by Vietnam.

By evaluating the current COVID-19 situation, participants determined the initial plan to organise the 2020 AFF Cup in November as being irrelevant to the practical conditions in regional countries. With the goal of ensuring the tournament’s integrity, they agreed to postpone the tournament by a year. 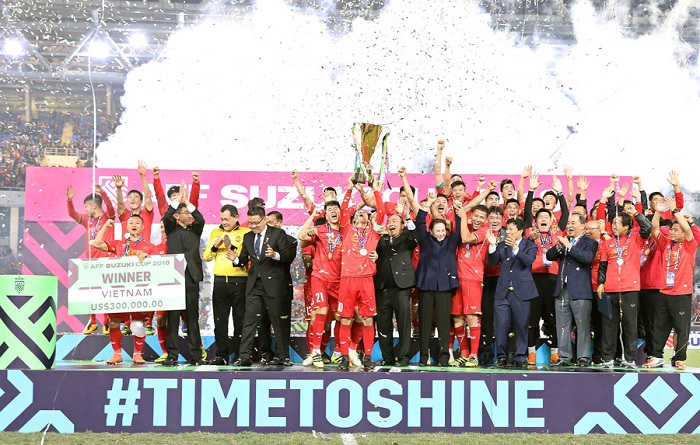 Vietnam are the reigning champions of the AFF Suzuki Cup.

Regarding the plans of the Vietnam men’s national team, in the event that the 2020 AFF Suzuki Cup is rescheduled to 2021 as proposed by the AFF Emergency Management, the VFF will continue to follow the plans of FIFA and the AFC to always take the initiative in the team’s preparations for the remaining matches in the Asian qualifiers of the 2022 World Cup. The training plans of Park Hang-seo’s side will also be adjusted according to allowable conditions, depending on the development of the COVID-19 pandemic.

* In an article published on July 30, the AFC announced that the VFF has been confirmed as the host member association for the AFC Cup 2020 ASEAN Zone Groups F and G matches, which are scheduled to take place over three match days from September 23 to September 29, 2020.

Asia’s football governing body stated that the matches in Group F will take place at the Thong Nhat Stadium in Ho Chi Minh City while the Group G ties will be staged in Quang Ninh’s Cam Pha Stadium. Nhan Dan

V.League 1 again postponed due to COVID-19

Football chiefs have postponed the V.League because of the renewed threat of COVID-19.

icon
Vien to go for gold at SEA Games 31
icon0

icon
Cave gets approval to be preserved
icon0

icon
Rare Buddhist tower in Nghe An in ruin
icon0