The figures, released by the General Department of Customs (GDC), showed that the woodwork industry has not been affected by the pandemic, but enterprises said the impact of the Covid-19 crisis on the industry will be seen more clearly later. 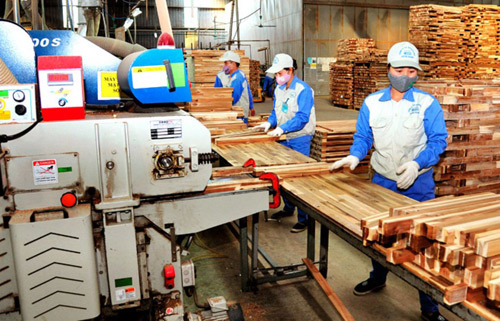 According to To Ngoc Ngoi, general director of Vinafor Saigon, exports in the first two months of the year fulfilled orders placed in 2019. In general, importers place orders 3-6 months before the delivery time.

But in early March, European importers told Vietnamese wooden furniture manufacturers that they would not receive deliveries at this moment. Export companies will only get new orders after the epidemic ends.

Since March 11, when WHO declared Covid-19 a global pandemic, many importers have contacted Vietnamese enterprises about delivery delay and still have not placed new orders. Some enterprises could export products in the first half of March, but production activities have become stagnant because of the lack of new orders.

Ngo Sy Hoai, deputy chair of Vifores (Vietnam Timber and Forest Products Association), said woodwork exports in the first months of 2020 increased by 13.8 percent thanks to orders which came in 2019. The export value will drop significantly in the next 3-6 months.

Woodwork manufacturers have asked for lower bank loan interest rate by 50 percent to help them overcome difficulties. They cannot receive payments for exports because they have not delivered goods, but they still have to pay expenses to maintain operation and pay salaries to workers.

Since European, South Korean and Japanese importers are busy struggling with the epidemic, they have made no new orders. Many woodwork manufacturers have had to lay off workers.

The biggest worry of the manufacturers is that they will lack workers when the epidemic is contained and they resume normal production.

“What worries us the most is that while waiting for jobs, workers may shift to other careers,” Ngoi said.

E-commerce is one of the best solutions for woodwork enterprises to cope with the Covid-19 epidemic, which has led to a sharp fall in demand.

The new regulation on certificate of origin (C/O) makes it more for Vietnam to obtain $11 billion in woodwork exports this year as planned.