Only 50 percent of Vietnam’s inland waterway network, measured in kilometers (19,000), is easily navigable, according to the Department of Inland Waterway.

Only 50 percent of Vietnam’s inland waterway network, measured in kilometers (19,000), is easily navigable, according to the Department of Inland Waterway. 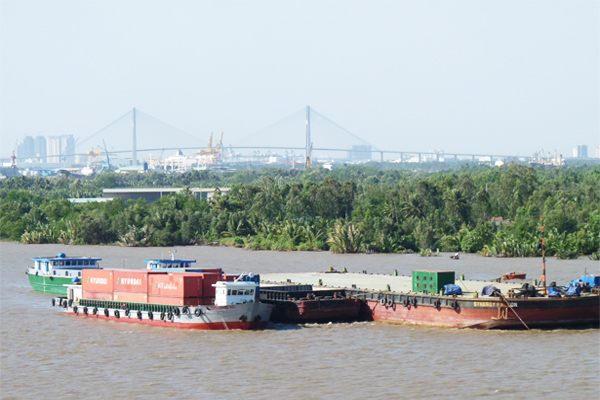 The department said that owners only choose waterway transport if they need to carry cumbersome bulk cargo such as coal, building materials, fertilizer and cement.

Only four percent of total rice output in Mekong Delta is shipped this way.

According to “Sustainable Development of Inland Waterway Transport in Vietnam: Strengthening the regulatory, institutional and funding frameworks”, a report of the World Bank, increased investment and sound management are critical to maintaining the competitive advantages of inland waterway transport.

The report showed that most transported volume is done on 7,000 kilometers of inland waterways under the control of central agencies.

However, only less than 30 percent of the network fits barges with a tonnage of over 300 tons, a modest rate compared to commercial waterway transport network in the world.

In China, Europe and the US, the inland waterway networks can take ships with tonnage of 1,000 tons or more to operate.

Most of the boats in Vietnam are small because of the limited depth of rivers and canals, and small passages. Ports are equipped with outdated facilities, low mechanization and poor maintenance, which explains the poor connectivity inland.

Inland waterway ports in Vietnam still cannot meet the requirements for container loading and unloading activities. About 15 percent of the cargo arrived at the ports without operation licenses, according to the Inland Waterway Bureau in 2017.

In the north, as there is no domestic container port for good unloading, container goods are mostly carried by land to industrial zones and export processing zones. Only 15 percent of goods at Hai Phong Port and 35 percent of container goods in Mekong Delta are carried on the domestic waterway network.

The investment capital poured into waterway transport infrastructure over the last decade mostly came from ODA (official development assistance), while the budget allocated by the government is limited.

The World Bank warned that the presence of many ministries in the domestic waterway transport management hinders the development of this type of transport.

The Vietnam Inland Waterways Association reported that there are 13 checkpoints for every 100 kilometers of river.