OCD An Thuan Phat Auctioning has announced the auction of Vinalines’ ships on August 9 as authorized by the national shipping line firm. 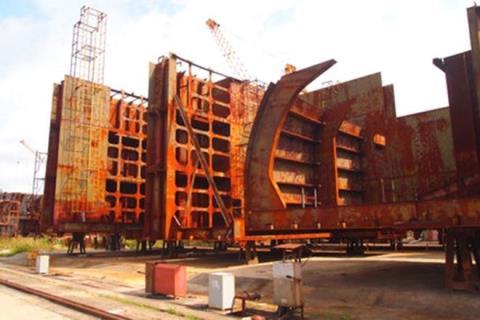 The hull sections have total volume of iron and steel of 325,110.7 kilograms, and a starting price of VND7,033 per kilogram.

Do Thai Binh from the HCMC Marine Science and Technology Association, a member of SNAME (Society of Naval Architects and Marine Engineers, said the selling of ships as scrap iron is ‘extremely regrettable’. The decision was made possibly because there was no other solution to deal with the consequences that Vinashin and Vinalines have caused.

Vinashin, the national shipbuilding group, and Vinalines, the nation’s leading shipping agent, once considered the leading units in their fields, have incurred big losses.

“In theory, the unfinished hulls could be used to make other ships with similar sizes, or they could be cut to make smaller ships. However, there might be no other choice and they (Vinalines) have to decide to sell the ships as scrap iron,” he commented.

“Vinashin and Vinalines made terribly wrong strategic investment decisions in the past. They built and bought ships without considering shipping market demand. Incurring big losses was inevitable,” Binh commented.

He went on to say that it would be better to deal with problems soon than delay settlement, because the ships will lose their value. However, this is difficult because it relates to many different agencies.

Analysts report that there are numerous unfinished, old and ‘ghost’ ships. Not only big groups but small companies have old ships that need to be liquidized. There are ship dumping grounds, called the ‘ship cemeteries’, in Hai Phong and Quang Ninh.

The ships will lose their value if their owners do nothing, and state management agencies continue to blame each other.

The project to build two 47,500 ton cargo vessels, HB02 and HB03, was implemented by the Ha Long Shipbuilding Company, a subsidiary of Vinashin to the order of Vinalines in 2010.

However, in March 2015, the project stopped.

In 2016, the famous floating dock of Vinalines worth VND500 billion was sold at a scrap iron price of VND38.5 billion.

Former Chairman of the State-run Vietnam Shipbuilding Industry Group (Vinashin) Nguyen Ngoc Su was sentenced to 13 years in prison for the charge of “abusing position and power to appropriate assets” at a first-instance trial yesterday.

The Vietnam National Shipping Lines (Vinalines) plans to sell 11 old vessels with total tonnage of more than 230,000 tonnes this year.