Price reductions, stiff competition and technical barriers are pushing the Vietnamese pepper industry against the wall.

Although pepper output and exports increased sharply in the first months of the year, farmers in Bu Dop district in Binh Phuoc province weren't happy. 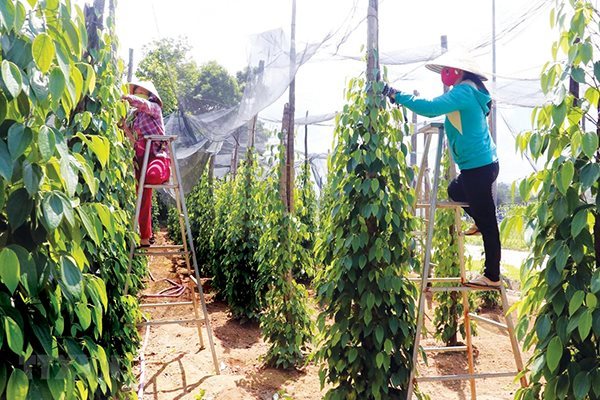 Nguyen Van Hanh, a farmer, said the pepper price has been decreasing over the last five years and the more pepper he harvests, the bigger losses he incurs.

“I have to struggle hard to survive current difficulties. If the prices don’t go up after two years, I will have to shift to other crops,” he said.

Hanh is not alone. The bank debts, the increased prices of agricultural materials and the pepper price decreases all have affected farmers.

The Import/Export Department of the Ministry of Industry and Trade (MOIT), in its latest report, pointed out that stiff competition, technical barriers and pepper price drops are causing the domestic pepper industry to decline.

The global supply has forced prices down. MOIT reported that in the first half of the year, Vietnam exported 177,000 tons of pepper, worth $452 million, an increase of 34 percent in quantity and decrease of 0.11 percent in value compared with the same period in 2018.

Meanwhile, Vietnam’s pepper growing area has been increasing rapidly over the last few years, from 51,000 hectares in 2010 to 153,000 hectares in 2017, or three times within seven years, according to the Ministry of Agriculture and Rural Development (MARD). And while the selling price decreased by 30 percent, the production cost in 2018 increased by 10 percent over 2017.

Five years ago, Vietnam led the world in terms of yield and output. However, the position was shaken because of the strong rise of Brazil, India and Indonesia. Brazil is the biggest rival of Vietnam with 80 percent of pepper exports meeting standards recognized as organic.

Analysts warned that FTAs and tariff cuts are not enough for Vietnam to increase export turnover. MARD warned that CPTPP member countries and the EU have set very strict requirements on product quality.

“The technical barriers in FTAs, such as requirements on food hygiene and plant protection chemical residues, are the big barriers to Vietnam’s pepper industry,” the Vietnam Pepper Association commented.

The recent signing of the EU-Vietnam Free Trade Agreement (EVFTA) has opened the door wider for Vietnamese farm produce to make inroads into the more than 500-million people strong market.

icon
Zalo Bank not licensed by SBV and MoIT
icon0