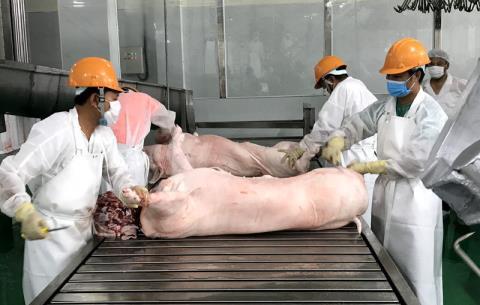 He noted that the pork prices in the Tet sale season were not overly high as predicted, thanks to the timely instructions by the government.

Asked if the imports would affect the domestic livestock industry, Thang said he doesn’t see any worrying signs.

The nCoV epidemic has been spreading, affecting the lives of people all over the world.

Positive signs about the African Swine Fever (ASF) have been reported and farmers are likely to resume farming. However, the supply still is not high enough to satisfy demand in the immediate time. Therefore, the imports won’t affect domestic farming.

In the long term, when the domestic supply increases, the Ministries of Agriculture and Rural Development, and Industry and Trade will have to report to the government about the situation and adjust the import plan.

In fact, once the domestic livestock returns to normal, the supply will increase and importers will stop importing pork if they find the imports less competitive than domestic products.

Nguyen Van Ngoc, deputy chair of the Southeastern Region Livestock Association, said importing pork is a necessary measure. The ASF has led to the serious shortage of pork in the domestic market, and the shortage needs to be solved by imports.

Some sources said half of pigs died in 2019, while government agencies said the figure was 20 percent.

Meanwhile, some analysts believe that 100,000 tons may be not enough. They warned that the shortage exists in many countries and it would be difficult to import pork.

“The fresh meat supply is in short supply. Importers will have to accept high prices,” an analyst said.

He went on to say that the pork price in Belgium is over VND100,000 per kilogram. If enterprises import pork from the country, the selling price will be relatively high in Vietnam.

According to Ngoc, as the pork price is too expensive, people have changed their habits and are choosing fish and chicken instead.

In the long term, according to Ngoc, it is necessary to change the livestock industry and relocate farms to areas far from residential quarters. This will control epidemics more easily.

The prices of pork and face masks were the centre of discussion at an extraordinary meeting of the steering committee for pricing on January 31 under the chair of its head, Deputy Prime Minister Vuong Dinh Hue.

Where is all the imported pork?

State management agencies affirmed that hundreds of thousand of tons of pork have been imported. However, consumers still cannot find imports at supermarkets and convenience stores in HCM City.