Chan May in Thua Thien-Hue is the only port in the key central economic zone covering five localities from Thua Thien-Hue to Binh Dinh that can be dredged to have stable depth of 18 meters. The other ports have depth of 10-12 meters only. 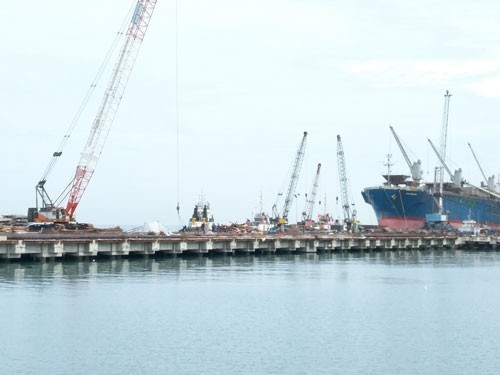 Chan May is a first-class general port of Vietnam, one of 46 seaports chosen by the Asian Yacht Association as a stopover for yachts in Southeast Asia.

However, the area is suffering from overlapping planning. The passages for ships going in and out of Quy Nhon fishing port have been leveled to create a container depot for Tan Cang Quy Nhon

According to Duong Dinh Giam from the Vietnam Economics Science Association, the ports in the areas were built in a fragmented way, with small investment capital, which did not comply with master development program. Most of the ports were built to serve specific projects.

“The key central economic region needs a general port which can serve both container and bulk cargo to develop the economy of the whole region,” Giam said.

Most of the container import goods to the central region are carried to the Da Nang ports with two main harbors – Tien Sa and Son Tra which has seen a growth rate of 16.2 percent in total goods volume. It is expected that the volume of goods through the port would be beyond capacity after 2020.

Da Nang authorities think that it is necessary to build Lien Chieu port, of 220 hectares, for VND32.86 trillion. Tien Sa port would a become tourism port and receive large 5-star ships to visit the city.

In Quang Nam, Ky Ha Port has great potential but it has not been exploited as it should be. Under the development program until 2020, this will be a local second-class general port with two harbors – Ky Ha and Chu Lai.

The Quang Nam provincial authorities, in a report to the Ministry of Transport, expressed willingness to turn Ky Ha into a first-class port with a volume of goods going through the port at 50 million tons per annum.

Real estate in coastal central localities has proved its attractiveness to both investors and buyers thanks to the booming tourism industry.