Experts believe that the departure of large manufacturing corporations from China, plus the plan to boost global economic development, will bring new opportunities to Vietnam.

Many large businesses are rethinking their production and business strategies, planning to diversify supply sources to minimize risks instead of relying on China. 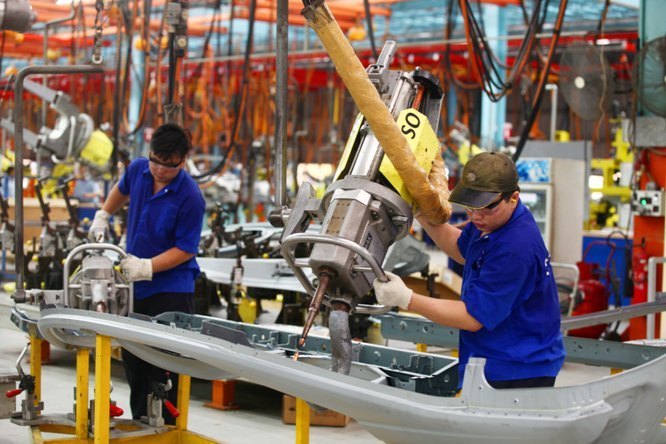 Therefore, a new map of the global production chain is expected to be redrawn after the Covid-19 crisis.

More than 30 years, the economic groups built a production system with the production base in China because of the low cost. However, the US-China trade war, which led to tax burden and the risk of supply interruption, has prompted them to reorganize the system.

Covid-19, which broke out in Wuhan, China, has forced them to move ahead to implement the idea. A lot of multi-national groups are considering redirecting their investments into non-China countries, according to Pham Nam Kim, a respected economist.

The Japanese government has decided to launch a $2.2 billion package to support Japanese businesses to relocate important production fields out of China. Meanwhile, the US wants to cooperate with partners in Indian Ocean and Pacific Ocean to set up an ‘economic prosperity network’ to boost global economic development in the post-Covid-19 period.

Vietnam now has opportunities to receive a new investment wave and join deeper into the global supply chain. Prime Minister Nguyen Xuan Phuc at the government’s April regular meeting emphasized that Vietnam needs to get ready for the investment wave.

The 2019 provincial competiveness index (PCI) report just released by VCCI showed impressive improvement in the business environment. Thanks to great efforts for reform, the time needed to set up a business has decreased by 38 days.

About 56 percent of foreign invested enterprises (FIEs) fulfilled business registration procedures within less than one month, while 92 percent of FIEs received all necessary procedures to become operational within three months.

The number of FIEs at which managers had to spend more than 50 percent of their time to learn and implement administration procedures has dropped from 70 percent in 2012-2016 to 41.3 percent.

Nevertheless, Vietnam’s ranking in terms of business environment is still low, at the 70th position in the WB 2019 ranking. This shows that Vietnam carries out reform, but slowly.

In ASEAN, Vietnam ranks fifth, after Singapore, Malaysia, Thailand and Brunei. And it will have to go a long distance to catch up with Thailand, which is in the 21st position and Malaysia in the 12th position.

The Vietnam Chamber of Commerce and Industry (VCCI) pointed out that land access and site clearance are the biggest problems, while legal documents are interpreted differently in different localities.

Vietnam has some great advantages while competing with regional countries in attracting capital flows moving out of China after the COVID-19 pandemic, experts have said.

With initial success in containing the novel coronavirus (COVID-19) and an advantage as a safe investment destination, Vietnam is attracting a shift of foreign direct investment (FDI) inflows.

icon
GDP still grows in midst of tribulations among the poor, businesses
icon0

icon
Debt under control thanks to prudent and effective actions
icon0