Vietnam’s exports still heavily relied on foreign invested enterprises (FIEs), while foreign direct investment (FDI) did not have positive influences to the other economic sectors of the economy.

2019 was the second consecutive year Vietnam obtained high GDP growth rate of over 7 percent. Total import/export turnover reached a record high of $516.96 billion and the trade surplus was the highest so far - $9.9 billion. 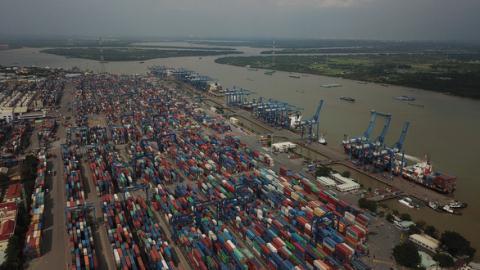 Nguyen Van Nam, former director of the Trade Research Institute, commented that the achievements gained in 2019 were ‘positive’, believing that they would be repeated in 2020.

However, he can see a lot of problems: despite recent improvement, the export still heavily relies on FIEs.

Nam went on to say that Vietnam’s economy in recent years has made big progress thanks to breakthroughs in viewpoints and policies. However, there is still a big gap between the policies and implementation.

The policies on attracting FDI are an example. Vietnam offers incentives to attract foreign investment with no regard of investment quality, while provincial authorities even offer preferences which go beyond the nation’s incentive framework.

Local authorities ran a race to attract foreign investors to their localities without thorough preparation in housing, health care and schooling for laborers.

Trying to lure foreign investment, Vietnam hopes FIEs would help develop the domestic economic sector and have positive impact on the national economy. However, the positive impact still cannot be seen.

About the economic performance in 2020, Nam said there are many difficulties ahead as countries still continue the process of trade liberalization, but with more cautioun.

“Once big countries pay higher attention to their interests, there will be more difficulties for small countries,” he commented.

Dinh Trong Thinh, a respected economist, also emphasised the fact that FIEs made up 68.8 percent of the nation’s total export turnover in 2019.

He said Vietnamese enterprises are seeing an excess of imports over exports, and the economy would bear trade deficit if FIEs don’t export more than import. The domestic economic sector has high demand for importing input materials, machines, equipment and technology to run their production.

The big problem is that Vietnam mostly imports these products from China. As a result, the deficit in trade with China is always high. Vietnam is trying to reduce the trade deficit by increasing imports from other countries which have higher technologies such as the EU, US, Japan and South Korea.

Vietnam’s economy is expected to maintain good growth in 2020

Vietnam is advancing into 2020 following good results in 2019. Experts and companies tell Việt Nam News about their forecasts of the country's economic prospects this year as well as opportunities and challenges facing the country.

2019 a successful year for Vietnam's economy

icon
FDI in Vietnam expected to surge after the epidemic
icon0