The Government has decided to allow Vietcombank and Vietinbank to increase their charter capital by 10 trillion VND (434.8 million USD) in the first quarter of this year, Deputy Prime Minister Vuong Dinh Hue said last month.

But it has not said how they could do so.

Analysts said the Government’s decision was in response to lenders’ insistent demand that they should be allowed to increase their capital.

But the decision to allow Vietcombank to do so has surprised many since just last year it increased its capital by selling a stake to Singapore sovereign wealth fund GIC.

For Vietinbank, the Government’s approval comes as big relief since its capital adequacy ratio (CAR) has been close to the State Bank of Vietnam (SBV)’s minimum prescription of 9 percent since the fourth quarter of 2018.

CAR is based on the Basel accords, an international business standard that requires financial institutions to maintain enough cash reserves to cover risks.

Its modest CAR has made it difficult for Vietinbank to contemplate increasing its credit growth rate.

It once even had to reduce its loans outstanding by 26 trillion VND to fall in line with the central bank’s CAR norms.

So what are the options for the two banks to increase their capital?

Some industry insiders said they could pay stock dividends to existing shareholders.

The Government’s financial position has improved significantly and so the finance ministry is unlikely to force them to pay dividends in cash as it has in recent years.

Another benefit of this is it would not dilute equity, which disadvantages existing shareholders.

But many experts said it might be preferable and advantageous for both sides for the banks to sell more equity to the Government.

It would cause foreign ownership ratios to fall, enabling the Government to sell more stakes to foreign investors.

Vietcombank is a typical case.

After those events, Vietcombank’s ownership ratio at the lender was down from 77.1 percent to 74.8 percent.

Foreign shareholders have significantly contributed to its outstanding performance in recent years.

Last year, for instance, its profit was 1 billion USD, or 23.16 trillion VND, and its target this year is 15 percent higher at 26.6 trillion VND.

According to the current law, foreign ownership of state banks is capped at 30 percent, but for Vietcombank the rate is now only 17.55 percent.

Vietinbank is the only State-owned lender that will not be able to make a private placement of new shares since the Government only owns a 65 percent stake in it, the threshold below which it cannot go.

So if the bank wants to increase its charter capital, it has only two options: issue shares to existing shareholders by paying dividends in stock or sell more shares to the Government.

There is also another intriguing question. If it does, at what prices will the Government buy the shares of Vietcombank and Vietinbank: face value or market value?

Paying the par value would be unfair to existing shareholders, analysts said.

But the market price, especially of Vietcombank, is very high.

It is not going to be an easy decision to make./.

VND92 trillion is the amount of money that four state-owned banks, or the ‘big four’, have paid to the state budget since 2014. 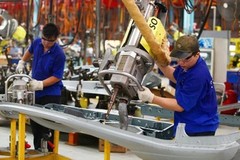