Passion fruit, pomelo, dragon fruit and fresh coconut have been exported to Europe in large quantities under the EVFTA, which took effect this year.

According to the Agro Processing and Market Development Authority, the prices of most fruits increased in September, benefiting farmers and export companies. 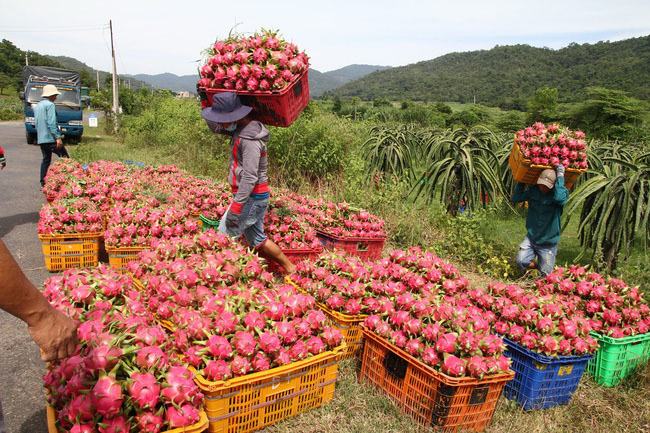 In Kien Giang province, Siamese banana prices bounced back to VND 9,000-10,000 VND per bunch, or 5 times higher than the lowest price, ending the long period of price decreases since last year.

Farmers said bananas are selling well because of high demand but there is a shortage because of rains and typhoons.

Meanwhile, coconut (makapuno) is collected by merchants at VND100,000-120,000 per fruit, an increase of VND20,000-25,000 compared with July. The prices increased because of the high demand from travelers to Cau Ke district during the Vu Lan and mid-autumn festivals.

Prior to that, the Ministry of Agriculture and Rural Development (MARD) reported, as EVFTA took effect, the export value of farm produce, including fruits, increased in August, reaching $14.7 million, up by 25.2 percent over the previous month and 6 percent over the same period last year.

In September, many consignments of fruits were shipped to the EU under EVFTA and enjoyed the preferential tariff of zero percent.

The commitment on tariff cuts has created great advantages in price for Vietnam’s vegetables and fruits over products from countries that have no FTA with the EU, such as Thailand, China, Malaysia and Indonesia.

Fruit export companies all confirmed that importers from the EU have increased demand for Vietnam’s fruits.

“A lot of importers have contacted us. However, we have to be very cautious in the context of the Covid-19 pandemic,” an exporter said.

In the first nine months of 2020, Vietnam exported $2.5 billion worth of vegetables and fruits.

The Mekong Delta region should take proactive measures to protect fruit orchards in the 2020 – 21 dry season as severe saltwater intrusion in rivers is forecast in the coming months, experts have said.

Plenty of Vietnamese consumers are willing to spend millions of VND in order to purchase expensive foreign fruit which is currently popular within the local market.