The northern province of Quang Ninh has outlined key measures to develop its marine-based and coastal economy, with a focus on eco-friendly tourism, maritime services, and coastal industry. 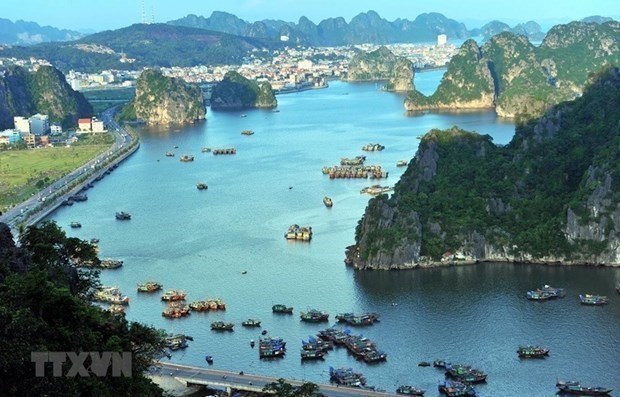 In a recent interview with the Vietnam News Agency, Permanent Vice Chairman of the provincial People’s Committee Cao Tuong Huy said Quang Ninh is on the way to becoming one of the country’s strong marine-based economic hubs, serving as a gateway and driving force of development in the northern key economic region with a network of deep-water seaports.

Key localities such as Ha Long, Cam Pha, Mong Cai, Quang Yen, Van Don, Co To, and Hai Ha will be connected to marine-based economic sectors and become national tourist destinations linked with major international tourism hubs in the region and the world via waterways.

Regarding maritime tourism and services, Quang Ninh is striving to become an international tourism hub with modern and concerted infrastructure, possess diversified and quality tourism products, a strong trademark imbued with the national cultural identity, and high competitiveness compared to countries in the region and the world, be a driving force of rapid and sustainable socio-economic development, and guarantee national defence and security.

The province will enhance investment in building tourism and trade infrastructure in coastal and island areas, making it easier for economic sectors to develop quality sea-island ecological tourism, community-based tourism, and international trade hubs. Ha Long will be developed into a modern and civilised marine tourist city while Van Don - Co To will become a high-quality sea and island tourism centre and a world-class regional entertainment hub by 2030.

The province will upgrade its fishing ports and wharves, offer fisheries logistics services in Co To and Van Don districts, and establish three key fishing centres in combination with aquaculture and key fishing grounds in localities and two seafood trade centres in Ha Long.

It will also develop logistics infrastructure to make it a sector providing high added value in tandem with promoting foreign trade.

It will develop the processing of aquatic products by using modern technology and improving efficiency, with a focus on food safety, to meet the quality standards demanded by major markets globally.

Quang Ninh will also make use of the achievements of Industry 4.0 to switch from the export of raw materials to deep processing, thus creating added value and saving marine resources.

At the same time, it will study several industries in service of the marine-based economy, seaport-logistics services, the new materials industry, tourism, and entertainment.

The Hai Ha seaport industrial zone will be developed into a major industrial and seaport centre. The province will also pay attention to several marine-based economic sectors based on advantages in marine resources and biodiversity.