Farmers in the Cuu Long (Mekong) Delta, the country’s rice granary, are having a bumper winter-spring harvest and getting high prices for their grain. 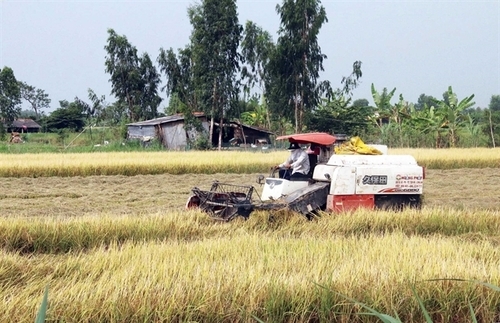 In Tien Giang, farmers in the Go Cong freshwater zone have harvested around 4,000ha and got an average yield of 6.5 tonnes per hectare, 1.2 tonnes more than last year, according to the province Department of Agriculture and Rural Development.

Nguyen Van Man, the department director, said farmers there sowed more than 21,800ha of rice, or 96 per cent of the target, almost all of it with fragrant and high-quality varieties.

The delta’s 12 provinces and Cần Thơ City had sowed the crop about one month earlier than normal to escape the impacts of saltwater intrusion and lack of freshwater during harvest.

Farmers grew 1.5 million hectares, slightly down from last year since in some places they were worried about possible saltwater intrusion and drought.

However, they have had sufficient water for irrigation.

In Cà Mau Province, they have harvested more than 2,000ha of the 36,000ha grown so far, according to its Department of Agriculture and Rural Development.

In Tran Van Thoi District, which has large areas under the rice-shrimp farming model, many farmers have started growing high-quality rice varieties like ST 24 and ST 25.

Both the rice and shrimp farmed under this model are clean since little chemical is used.

In Tran Van Thoi District, farmers are getting a high price of VND9,000 for ST 25, which ranked first in the 2019 World’s Best Rice Contest.

In Hau Giang Province, farmers are selling their rice at VND500-800 a kilogramme higher than last year.

Tran Chi hung, director of its Department of Agriculture and Rural Development, said local authorities and farmers had been regularly warned about saltwater intrusion so that they would take proactive measures to protect themselves.

A salinity level of 0.39 per cent or more has been recorded in Vi Thanh City since the middle of this month while 0.24 per cent has been found in Long My District.

Most rice varieties can only cope with a salinity level of up to 0.1 per cent.

The peak saltwater intrusion in the delta this year is forecast between February 25 and March 4.

Farmers are expected to complete harvest of the rice crop by May, according to the Ministry of Agriculture and Rural Development’s Plant Cultivation Department.

A draft master plan for the Mekong Delta for 2021-2030 and vision to 2050, recently released to collect public feedback, views climate change as not only a challenge but also an opportunity for local development.