Chinese apps in Vietnam are luring borrowers who have to pay back debt at high interest rates within a short period of time.

A woman in Tay Ninh province, 37, borrowed VND2 million through One Click Money for 14 days at the interest rate of 44 percent. However, she could not pay the debt on schedule. She decided to borrow money through another app and use the money to pay the old debt. 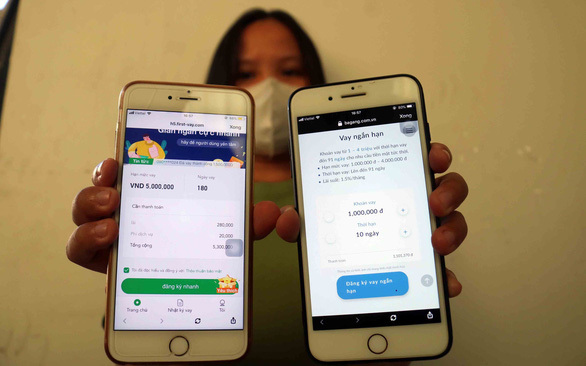 After three months she had to pay VND20 million, or 10 times higher than the initial debt. As of the end of January, the amount of debt totaled VND54 million.

TT, 25, an officer at a tourism company, who needed money to pay tuition for her younger brother, decided to borrow money through Idong. She borrowed VND4.2 million, but she received VND3.5 million only because she had to pay a service fee.

As the epidemic broke out and the tourism company had to suspend operation, TT became redundant and unable to pay debt. The lender then called T’s relatives to humiliate, demean and force her to pay debts.

Dat Viet quoted its sources as reporting that there are 20 apps that provide loans of this kind, including One Click Money, Cash VN, Uvay, Vaydong, Zvay, F-458, M88, Myway and Tien nhanh.

When borrowers denounced the lenders of providing loans at exorbitant interest rates, many apps changed their domain names, which made it impossible to log in to the apps.

N.V.T, 28, in district 2, HCM City, is a debtor of Vtien. On May 30 morning, when T tried to access the website to check his debt, he unexpectedly read the notice that the website had temporarily stopped operation.

In addition to changing their names, the lending websites have also leased new domain names with the suffix of ‘.vn’.

According to the police, the apps are owned by Chinese. As the Chinese government has tightened control over P2P lending, Chinese apps have flocked to Vietnam to earn money.

According to lawyer Truong Thanh Duc, Vietnam still doesn’t have a legal framework for P2P lending and app-based lending, so it has become a fertile land for the apps to ‘boss the show’.

The State Bank of Vietnam (SBV) has issued a document requesting credit organisations and branches of foreign banks to expand credit activities serving production, business and consumption as part of efforts to limit “black credit”.

Will consumer loans remain a money-spinner for banks post-COVID-19? This was a question recently posed by market observers after witnessing the pandemic’s big economic impact on individuals and households,