The Dong Tam Group held an inauguration ceremony for the first phase of the Long An International Port in Tan Lap commune, Can Giuoc district, the southern province of Long An on September 26.

Construction for the second phase of the port also began the same day.

The 147-hectare port is developed in three phases with total investment of nearly 10 trillion VND (430.7 million USD). It is designed to have seven wharves, which are able to receive ships of up to 70,000 DWT. More than 400,000 square metres at the port were arranged to build warehouses, serving the transportation of farm produce, steel, fertiliser, among others in the Mekong Delta. 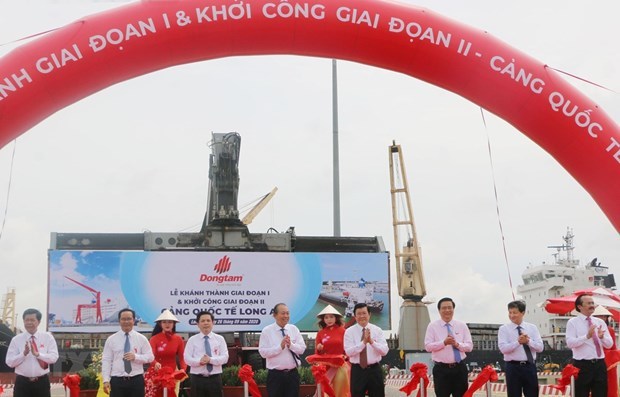 The port project is key to reducing traffic congestion and logistics costs in Long An province and the Mekong Delta.

Construction has been completed for three wharves with total length of 630 metres. As of 2019, Long An International Port received nearly 1,000 domestic and foreign ships (including many 50,000DWT ships), with about 1 million tonnes of goods imported and exported through it.

This year, the Dong Tam Group are building wharves No.4 and 5, and striving to put them into operation in 2021.

The project investor is working on legal procedures to expand the port and build two other wharves, at an undisclosed date, that would be able to receive 100,000DWT ships.

This would increase the total number of wharves to nine, and their combined length to 2,368 metres, making it one of Vietnam's longest international ports.

Minister of Planning and Investment Nguyen Chi Dung has urged localities in the south-east and Mekong Delta regions to develop transport infrastructure by diversifying the sources of and effectively using capital over the next five years.